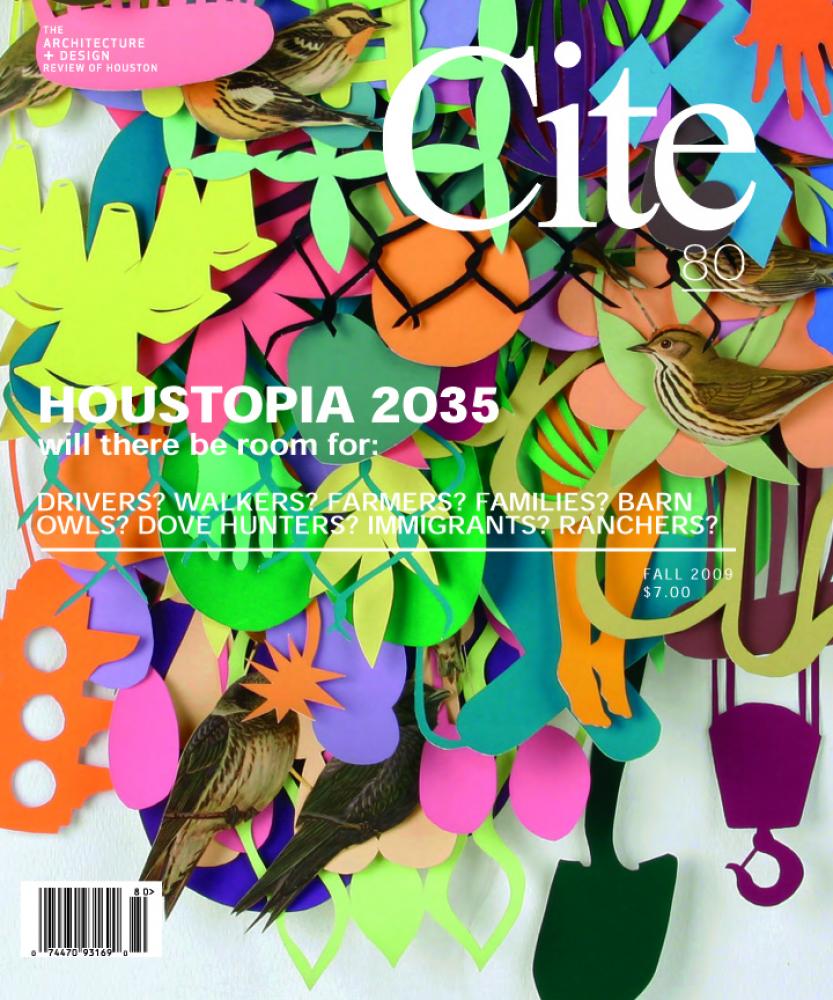 In the 1990s, a new wave of architecture professors at Rice University took on Houston as an experiment in urbanism. Whereas American cities like Boston and New York offered infill and contextual strategies by which to analyze and investigate, the seemingly blank canvas of the "Space City" offered up the idea of a new breed of city, or anti-city. As students we were rolled out to all corners of the region to investigate the hidden city --- how the industrial warehouse, the bayou, the suburban tract, the mega-mall, the parking lot, and all the spaces in between created the tapestry that is Houston.

Now professors look elsewhere, to Brazil, to China, to study the emerging city, while Houston continues to grapple with what direction to take as it matures. This issue of Cite asks what will the future bring for Houston?

Jeff Taebel of the Houston-Galveston Area Council shares scenarios for fitting in 3.5 million more people. From that macro-regional perspective, we zoom in on neighborhoods, where we ask the same questions of Houston's future, and further in to the scale of an individual plot, a home, a park.

Is there an authentically Houstonian way to proceed? Does the pioneering spirit of an oil-fueled, tear-it-down-and-build-it-bigger, wide-open Houston give way to a somewhat more ecologically friendly imitation of urban forms in other cities? Commenting on the planned Post Oak light rail line, Susan Rogers remarks that by continuing to serve consumers in cars while creating a French-designed pedestrian-friendly environment, the district was attempting to have its urbanism both ways.

If there is an answer to what Houstopia would be, it is this desire to have it both ways. Can we have our cars and new walking districts, build new suburbs and preserve the prairies? Can we find a way to be mixed-use, multi-family, and multi-income as well? Can we be progressive and forward thinking, looking outwards for inspiration yet building on that which is uniquely Houston? More importantly, who makes these decisions --- city officials or developers, special interest groups or Houstonians themselves?

Design: Out of the Woods and Onto the Shelf

Houstopia 2035: Is a New Consensus Emereging on a Denser, More Walkable Future?

Midtown: Future of Houston's Inner Loop Neighborhoods or Development Patterns from the Past?

A New Center on the Periphery

A Radical Remake of Uptown: Can What was Houston's Suburban Fringe Turn into an Urban Neighborhood Full of Street Life and Character?

Where's the Revolution? The Changing Landscape of Free Speech in Houston

Architectural Principles in the Age of Cybernetics by Christopher Hight

MFAH Bookstore Recommends: Books on Architecture and Design for All Types

Can Houston Feed Itself?