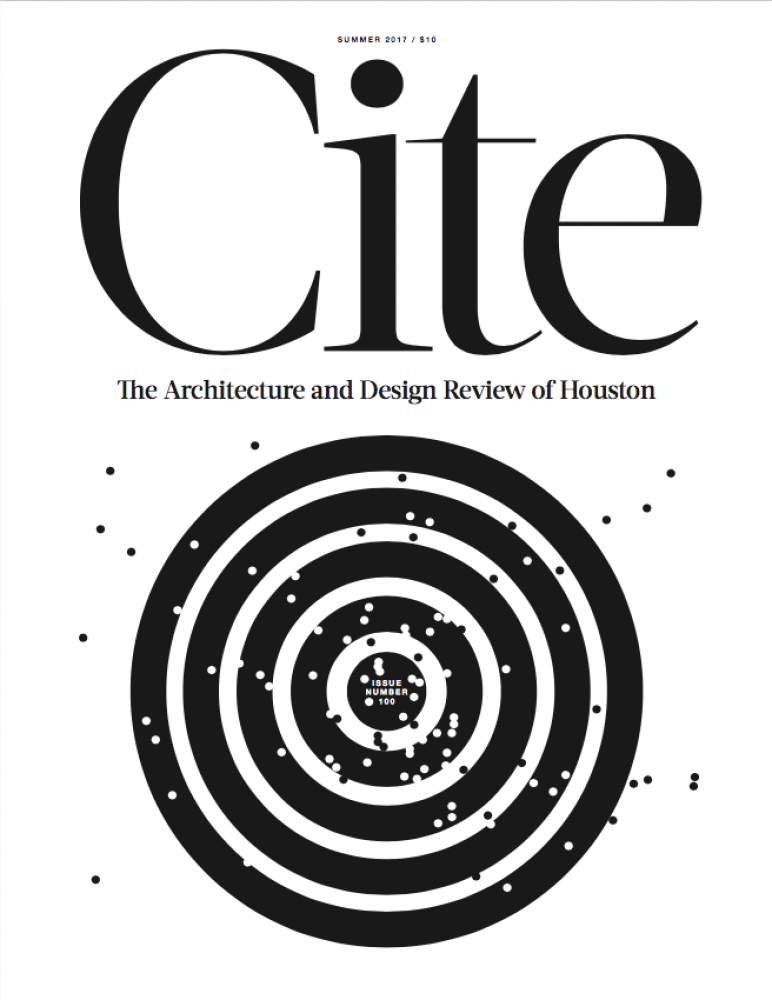 It was the early 1980s and Houston was ripe for a design publication that would offer an ongoing critical voice, while reporting on our vibrant and fast-developing city. I really had no idea what I was doing, but, thankfully, the others did. We were an ad hoc group, with a kind of “... Hey kids, let’s put on a show...” spirit. We didn’t know what we didn’t know, and we certainly didn’t know that we were launching a publication that would last 35 years and one hundred issues.

While editing, writing, and contributing duties were assigned, I was elected designer, primar- ily because I knew how to set type (sort of).

What would we call this new thing? “Sprawl”? No, too cynical. “RaDAr.” (Get it?) Good God, no. “Cite” was quickly offered, and that was that.

From a typography standpoint, “Cite” was great – only four letters, so the name could be nice and big on the cover, looking rather classy in its Times Roman font. And, of course, there were all the wordplays: InCite, Citlelines, OverCite, etc.&etc., along with my favorite, Big Cité Beat. (Thank you, Maxine Mesinger.)

I served as designer of the first five issues of Cite before moving to Austin, where I’ve delighted in watching as a series of gifted individuals and  rms including Lorraine Wild, Craig Minor and Cheryl Beckett, PH, and CORE have elevated the design far above what I was able to do at its launch.

I was genuinely touched by the invitation to return to the publication I had helped get off the ground so many years ago. It’s said that you can’t go home again, and yet my involvement in this issue has felt very much like that. What would be the focus of issue 100? Along with the editorial committee, Cite editor Raj Mankad and I considered half a dozen possibilities. In the end, we used this issue as an opportunity to hit the pause button, take stock, and explore the city through a single photo essay. We would take a wide-eyed look at Houston and see what we see. Cue noted Houston photographer Paul Hester, a Cite contributor and supporter since the beginning.

What would be photographed? How would the sites be selected? We thought it important to represent the whole, entire city – not just the inside-the-loop areas that are so often the focus of attention.

Paul, Raj, and I gathered at The Ginger Man bar in the Village. Paul brought a large Key Map of the Houston region, stretching from the Brazos to San Jacinto rivers, and Raj brought a handful of steel-tipped darts. The proprietor graciously allowed us to pin the map on a blank wall and beers were ordered. The rules were simple. Take turns throwing darts at the map (the three of us, along with the bartenders and several patrons), and carefully catalog, and later geo-tag, each location of one hundred throws.

Paul then spent the next several months visiting each site and photographing whatever was there – ugly, beautiful, bustling, deserted, interesting, banal, dilapidated, or shiny-new. His photographs show us Houston just as it is.

There’s a serious history to randomness. We could talk about the Situationists in France. Or a tradition among journalists who  nd subjects by picking numbers out of a phone book at random. Paul has long used darts with students in his photography classes at Rice University. But the randomness of dart throw- ing was only the  rst step. Decisions were made along the way, like the choice to cover the entire region. And, beyond that, as we were throwing darts, we did our best to hit all areas of the map, despite our terrible aim. In the  eld, Paul decided how to frame the images in the vicinity of where the darts landed, drawing on decades of experience shooting Houston. Finally, on the pages, the photos are presented in the order the darts were thrown, rather than grouping by geographic districts, building types, or aesthetic considerations. We have, of course, designed the spreads so that some images are larger than others, which also affects the pacing. Various seren- dipitous juxtapositions have delighted us, and we hope you find joy in them as well.

Paul’s photographs serve as the basis for a conversation among several noted observers on page 65, and as the subject of an essay by architect David Heymann on page 72.

We also share a farewell speech from Linda Sylvan, the longtime executive director of the Rice Design Alliance. Raj muses on the past and future of Cite while engaging several Cite founders on page 76. We conclude the issue on page 80 with a lighthearted lagniappe, testing your knowledge of all things Cite.

For this special issue we’ve returned to the tabloid format of the early issues, and limited ourselves to black and white for the cover. If the masthead looks a little different it’s because the original Times Roman has been changed to Acta (dstype.com), a beautiful display font designed by Dino dos Santos.

The cover design makes an obvious nod to issue one. The first issue included an article by architectural historian Stephen Fox on the then recently announced Menil Collection by Renzo Piano, which, from an editorial standpoint was, perhaps, the obvious cover story. A story by architects Bill Anderson and Bill Neuhaus about sewer permits was also important and timely, and offered me the opportunity to make a particularly graphic cover. I paired the elegant new masthead against the common sewer cover. The manhole cover, which prominently featured the words “City of Houston Sewer,” drew consid- erable  ak, which thrilled me. It was irreverent, and we got noticed. Raj thinks we’ll get  ak for this issue too, so the thrill continues.

I want to thank Raj and Linda Sylvan for the completely unexpected and joyous opportunity to be a part of Cite 100. It’s a great honor, and it’s wonderful to come home.

Letter from the Guest Editor

Houston As Is: 100 Photographs by Paul Hester

Beyond Random: A Discussion of "Houston As Is"