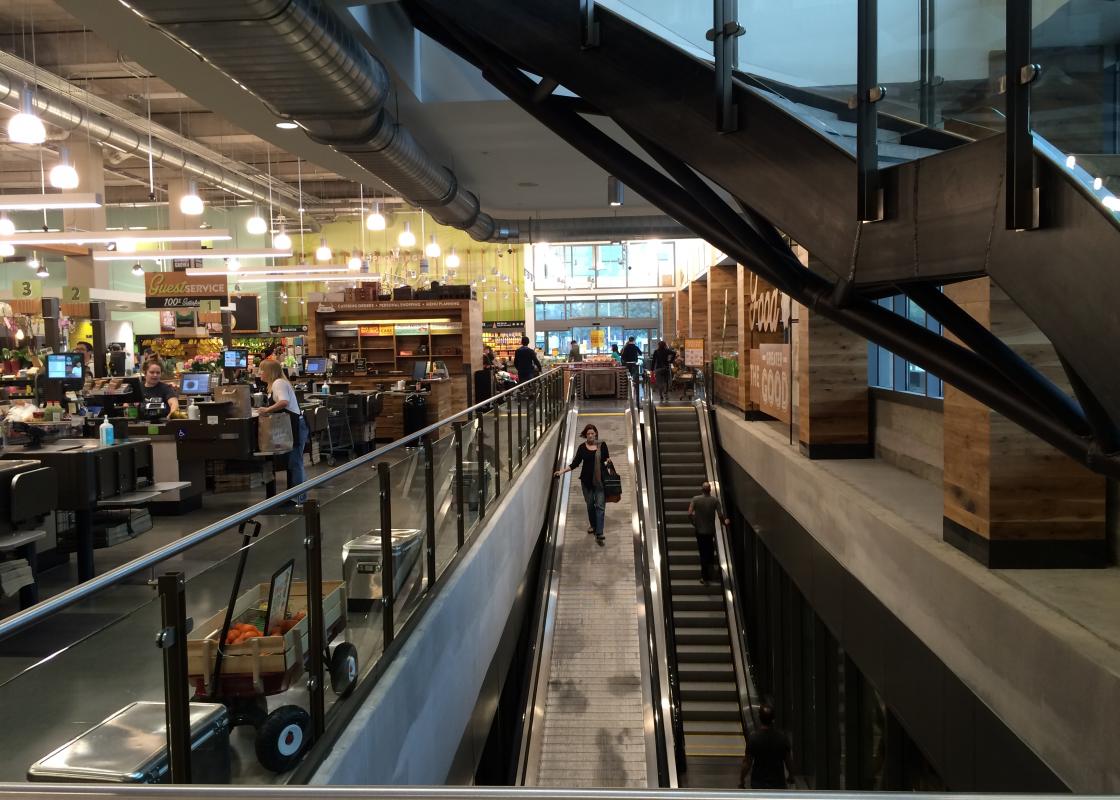 The newest Whole Foods in Houston opened last November on Post Oak Boulevard in Uptown (or the Galleria area, as some natives might still be conditioned to say) to great fanfare: it is the first Whole Foods in the United States to contain a craft beer brewing operation and pub within the store.

However, what’s more newsworthy about this particular Whole Foods is its location, its build, and itself as a manifestation not only of the changing fabric of the area, but also of the suburban/urban mashup that is Houston, and what we want from something as seemingly straightforward as a grocery store. 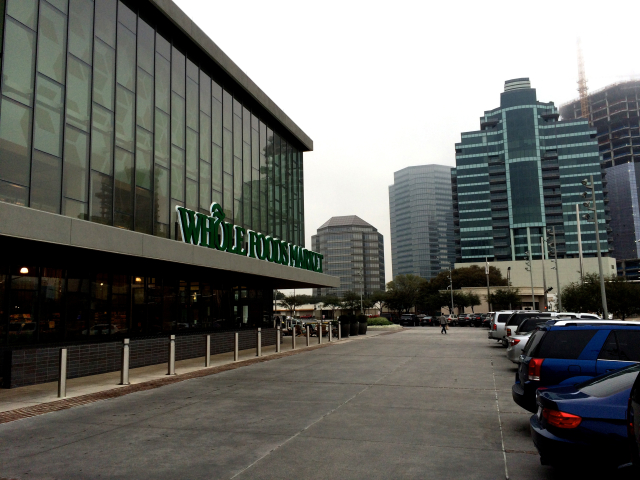 When Gerald Hines built the anchor to the Galleria mall in 1970, it set a new precedent in the mall explosion of its times: giant, chain department stores connected together by hallways lined with other chain stores, flanked by widespread parking on all sides, located on the edge of town --- a new and private Main Street giving shoppers an opportunity to buy things without having to go downtown.

Houston developed so rapidly that townhouses and office buildings soon sprung up all around the Galleria, making the neighborhood, as Polly Morrice writes in her Cite essay on the radical remaking of Uptown, one of the more mixed commercial/residential areas in Houston.

Now, the neighborhood formerly known as the Galleria has become Uptown --- a name sourced from upper Manhattan and Billy Joel --- a label connoting an upscale urban neighborhood close to the core of the city. But is Uptown urban? Can it be, with big box stores right in the middle of it?

When big box stores move in to urban areas, they adapt in interesting ways, as Allyn West has discussed in the case of Walmart; Judith K. De Jong gives an excellent explanation of “stack and mix” architecture in that weird zone of the urbanized suburbs/suburbified city. The new Whole Foods on Post Oak is no exception, and the way it is transforming itself says a lot about how it wants to cater to Houstonians. 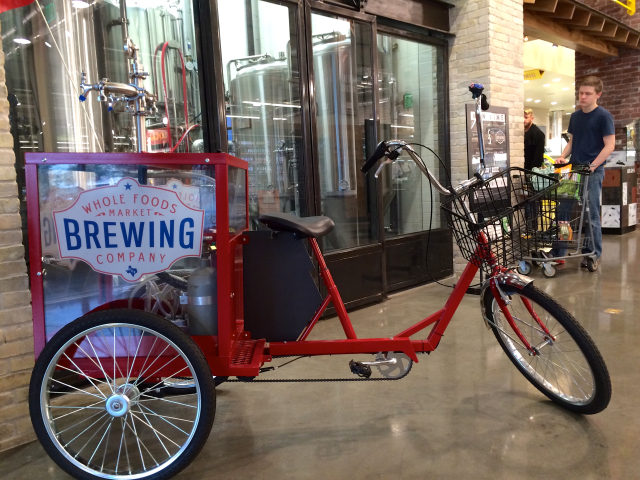 Right from the approach by car, bus, bike or foot, visitors see a single row of surface lot parking spots next to a wide strip of café seating in front of the enormous, multistory, 40,000-square-foot Whole Foods building; in an unusual move for a big box store, especially a grocery store, there may well be more café seats than parking spots out front. The rest of the parking is hidden in a subterranean garage that has captured the fascination of shoppers with its nifty lighting system that indicates empty spots from afar.

The pub entrance is right near the store entrance, so patrons can make a beeline for an open stool, a view of the vats, and a crafted-on-site brew. While there is a bar menu with daily and nightly specials, patrons are encouraged to bring food in from the store to eat in the pub. Conversely, patrons can get their beers to go, either to drink while they shop or to take home in a “growler,” aka jug. 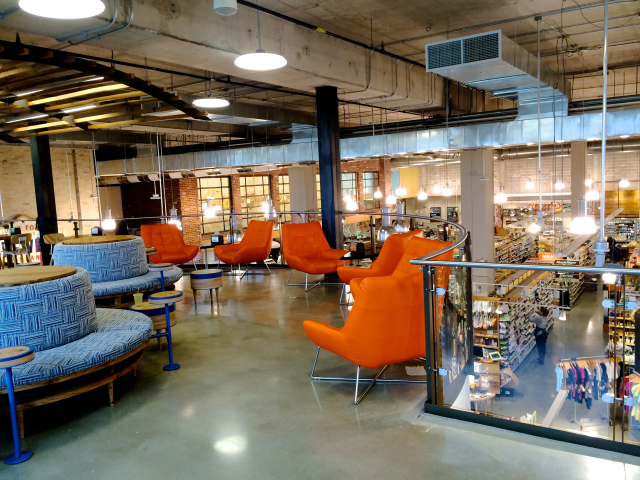 And what an array of ready-to-eat food is available! Right next to the pub is Sidestreet Tacos, a stand-alone taco stand, then there’s the sushi counter, and next to that is the custom pizza place. Further down, sporting its own logo, is Yianni’s Souvlaki Grill, at the ready for all things Mediterranean, then the salad bar, the deli counter, the hot prepared foods bar, the soup bar, the olive bar, the barbeque brisket bar, the cookie and candy islands (2), the juice bar and the coffee bar. The bartender estimated that 40 percent of the food available in the store could be eaten immediately upon purchase; from this vantage, it appears likely more.

Luckily, for those who choose to do exactly that, there are more than 225 seats available, spread across the property in the pub, the upstairs café seating area and the long stretch of tables outside. To accompany meals, beers, juices and what-have-you are wifi, silverware, napkins, water and indie rock piped through the speakers. 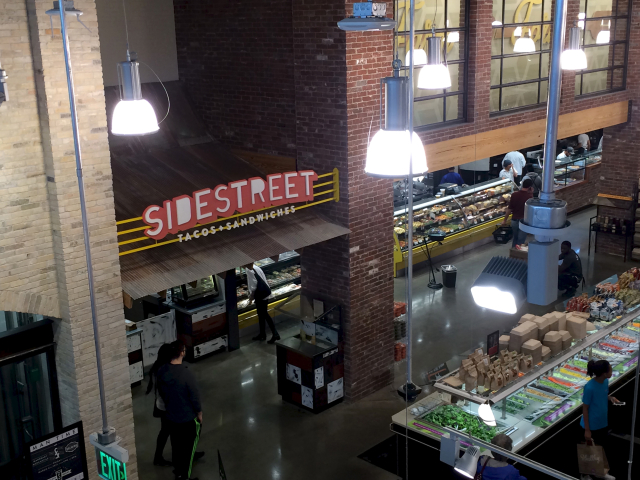 The view from the balcony perch of the upstairs café extends across the entire store. A patron can gaze at contented shoppers, mentally walk the mere seven aisles, half of which are non-prepared food, half are not (Did I get enough essential oils? Do I need some organic dog food? Hey, look, a scarf!), or just hang out and enjoy the seemingly-hand-stamped signage, the pipes and ducts running along the ceiling and the carefully-placed exposed brick, reclaimed and trucked in from Milwaukee. Let me say this again: maybe you’d like to hang out at a 40,000-square-foot grocery store. You’ve got a few to choose from.

Grocers weren’t always in big boxes. Way back when (and still in Europe, among other continents), food shopping was an urban experience with individual stops at the butcher, baker, and vegetable stand. But when large, single-story supermarkets came into being, shopping, and shopping centers, changed. As Bruce Webb writes in “Market Strategies” (Cite 29), “Cart-assisted, self-service shopping determined that modern markets would be horizontal building constructed on pieces of land better measured in acres than in city lots --- in short, [it] determined a suburban building type.” 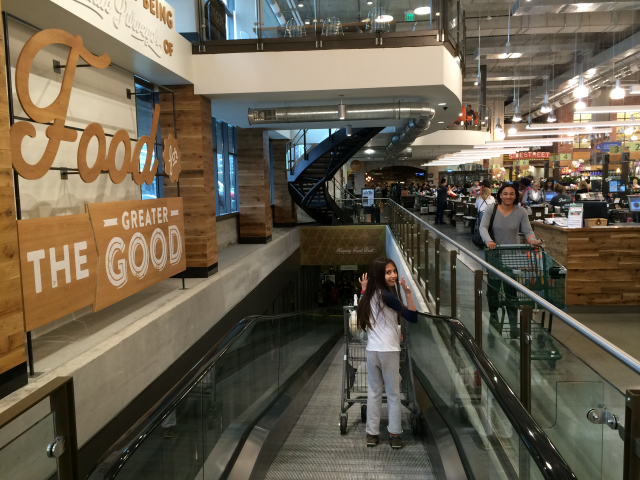 Grocery cart wheels lock in place on the way to the basement.

At the new Whole Foods, the individual (urban?) market stalls have returned, but instead of being open air, they are contained in one enormous building. At the Whole Foods stalls, patrons buy not ingredients but custom-made pizzas, tacos, a grilled vegetable plate, or some sushi. While there are still a few large shopping carts of the suburban supermarket of yore, the majority of shoppers carry or wheel small baskets with enough room for a (prepared) dinner or two, which they can eat on site – with a beer! For those lost in the 40,000 square feet, the new Whole Foods has an in-store beer delivery tricycle. Mutations indeed.

Now, a grocery store is not a grocery store. And it’s not quite a market. It’s a food court --- but not a food court filled with Speedy Wok and GreeZee Burger, one with a little tray of sushi for $14.99, craft beer on tap this week only, freshly made beet juice and a wedge of Humboldt Fog with artisanal water crackers. Plus, the music is hipper, the chairs are more stylish, the wood is reclaimed, and the food is potentially healthier (if you’re eating celery instead of brisket). It is a hybrid urban/suburban experience within a hybrid urban/suburban city. 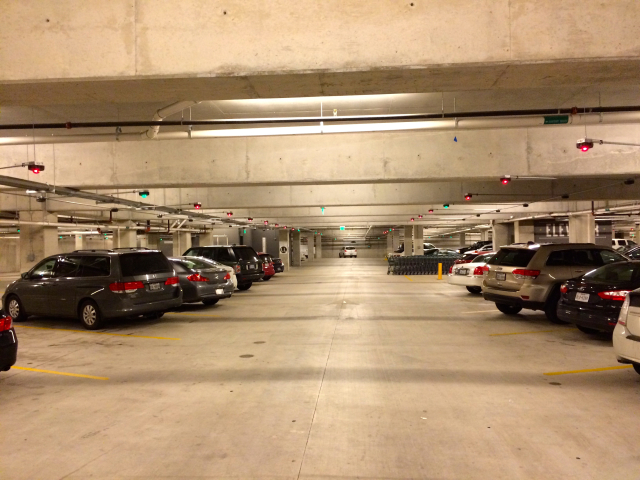 Lights indicate which spots are open at the underground parking lot.

Urbanites, or is it suburbanites, who do not want to cook can still go to the grocery store/mall, have a beer, people watch, eat, and leave with a six-pack of recycled organic toilet paper. They have avoided greasy takeout food as well as the loneliness of eating in a restaurant solo. Up there in the balcony café, it’s like dining al fresco at some European café on the piazza. Or is it like being in a gritty, urban warehouse repurposed into something cool? The venue is open to interpretation.

The proposed Bus Rapid Transit line down Post Oak would move Uptown all the more closer to the urban. In the Cite article about the remaking of Uptown, Susan Rogers, director of the University of Houston's Community Design Resource Center, notes that the dual impulse to offer mass transit while also staying friendly to drivers typifies Houston's desire "to have its urbanism both ways" and that "Uptown will probably be the best example of trying to make that work."