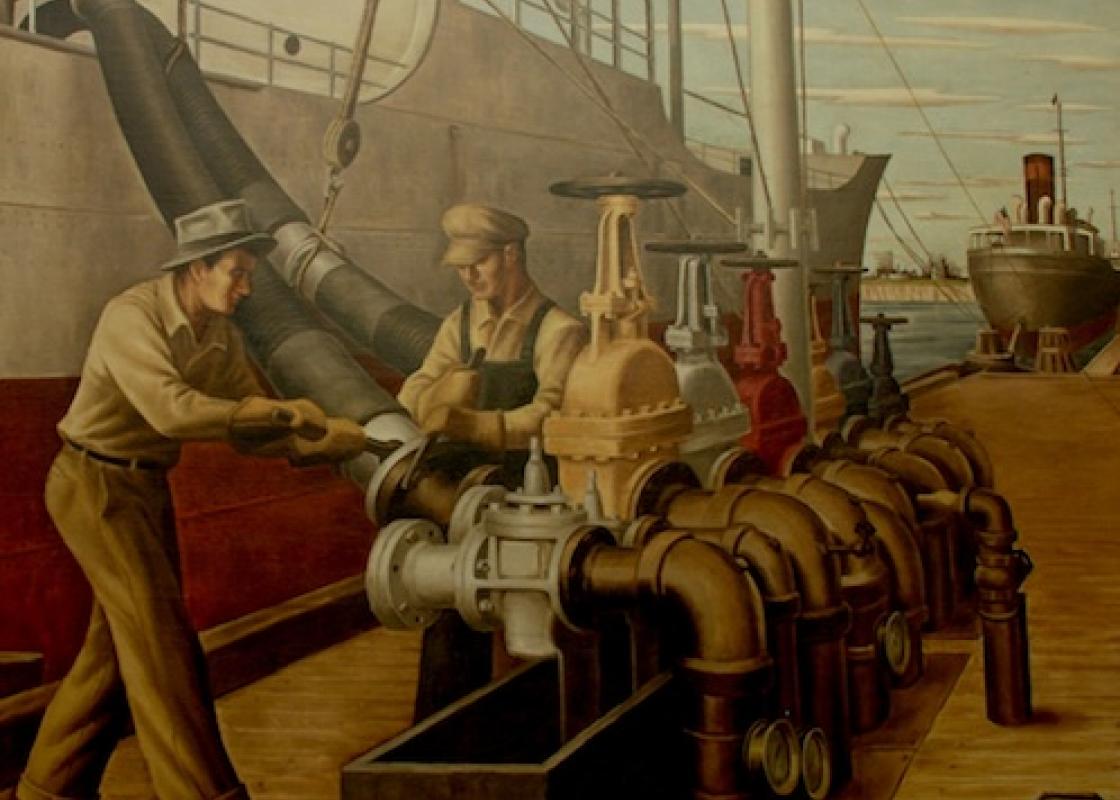 In March 2018, Houston hosted the Funders’ Network Annual Conference to explore strategies for and stories behind creating more equitable, sustainable, and resilient communities. Rice Design Alliance created five tours in collaboration with the Funders’ Network for people interested in getting a first-hand look at Houston’s vibrant neighborhoods and unique approaches to tackling complex challenges. This bike tour explores the green infrastructure that is revolutionizing Brays Bayou.

Houston is in the midst of an effort to add linear parks along what will be 150 miles of equitably-distributed bayou corridors. Houston Endowment played a critical role in the concept’s development by funding the Houston Parks Board to conduct a pilot project along Brays Bayou as well as master planning and initial implementation costs. With resulting data and proof of concept, former Mayor Annise Parker backed a bond measure for what became the Bayou Greenways 2020 effort. In 2012, a super-majority of Houstonians approved $100 million in bond funding matched by over $100 million in philanthropic support including a $50 million gift from the Kinder Foundation.

When completed, Bayou Greenways 2020 will be one of the longest off-street hike-and-bike trail systems in the nation, and planning is underway for “Beyond the Bayous,” which is a vision to extend connections into under-resourced neighborhoods to boost overall connectivity to jobs, schools, and parks. Bayou Greenways provides a model for public-private investment in a large-scale, equitable infrastructure.

Lower Brays Bayou is among the most complete and well-connected of the bayous, offering a taste of what is to come for more of Houston. The trail connects some of Houston’s best parks; stitches together African American, Latino, and Anglo neighborhoods including Riverside Terrace; and links major employment centers like the Texas Medical Center, University of Houston, and the Port of Houston.

Points of interest along the Brays Bayou Bike Tour

“Our community’s cultivation of Brays Bayou’s natural beauty helps repair our damaged human-nature relationships. Through our shared outdoors appreciation Houstonians can better connect to enjoy the diversity in our different classes, races, and ethnicities,” says Carroll Parrott Blue, a public artist and community organizer in Houston’s OST-South Union neighborhood. “Houstonians consistently vote for bonds that improve our environment, especially the Bayou Greenways. This conscious caring for greening Houston can help clean up the toxic wastes in our air, earth and waterways that are increasingly exacerbated by the growing intensity in our natural disasters.”

As post-Harvey spending on infrastructure ramps up, Brays Bayou offers important lessons in green infrastructure that mitigates flooding, connects communities to economic assets and one another, and puts people in closer relationship with ecosystems.

The Hermann Park Conservancy has organized an annual “park to port” ride along this route with excellent background on its website that informed this guide. So get a first-hand look at Houston’s Green Revolution. Hop on a bike and explore the lessons in urban design Brays Bayou has to offer.

1. Hermann Park
The first master plan for this 445-acre park was developed by George Kessler in 1916 and then Hare & Hare after 1923. Hermann Park is home to numerous cultural institutions, including the Houston Zoo, the Houston Museum of Natural Science, and one of the nation’s earliest desegregated public golf courses. After years of neglect and with funder support, the 1992 Heart of the Park design competition held by the Rice Design Alliance spurred renewed attention to the park, resulting in a Hanna/Olin master plan implemented by the Hermann Park Conservancy in time for the park’s centennial with over $120 million in public and private funds.

2. Bill Coats Bridge
A contemporary suspension bridge completed in 2012. The bridge provides a key connection to the Brays Bayou Greenway.

3. Columbia Tap
A rail right of way was converted to a bicycle path in 2009 and connects Brays Bayou to Texas Southern University, Third Ward, and Downtown. Beyoncé’s childhood home is nearby! In 2017, Houston adopted a comprehensive Bike Plan that, if funded and implemented, will dramatically increase the number of dedicated bikeways on streets and off-street paths along utility right-of-ways and drainage infrastructure. Over the past three years, the nonprofit BikeHouston evolved from a bicyclists’ club to a credible advocacy organization with funding from Houston Endowment. BikeHouston played a key role in the adoption of the plan through impassioned outreach, education, and advocacy after a string of fatal bicycle-car collisions.

Smither Park, an Orange Show Center project, is one of many parks that will become more accessible with the Bayou Greenways initiative. Photo: Pete Molick

4. University Connections Bridge at MacGregor Park and University of Houston.
This project received federal funding from a TIGER grant—secured with matching dollars from local funders—and provides a key link to students and nearby communities. The 83-acre MacGregor Park was developed in 1929 and linked to Hermann Park by landscaped roadways, built on either side of Brays Bayou.As the Houston Parks Board's “51 Super Places” notes, the park features a Mission Style community center, swimming pool, disc golf course, the ballpark of the Texas Southern University’s baseball team, and a statue of the park’s namesake, Peggy MacGregor, by Gutzon Borglum, the sculptor of Mount Rushmore.

5. Fonde Park Gateway, Orange Show, and Smither Park.
The Orange Show was the creation of folk artist Jeff McKissack and includes over 3,000 square feet of outsider-style folk art—centered around the theme of oranges—including a wishing well, pond, and chimes. The adjacent Smither Park provides a venue for new mosaic artists, who can be seen working on Saturdays. 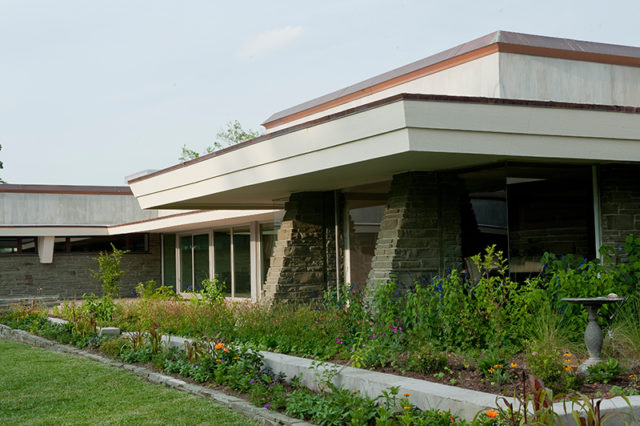 7. Spurlock Park Gateway, 6700 Park Lane
In 2008, the Houston Parks Board partnered with the Idylwood community to complete renovations to Spurlock Park. The park expanded as a result of the acquisition of a former residential lot through the FEMA buyout program.

8. Gus Wortham Park Golf Course, 7000 Capitol Street
The golf course opened in 1908 as an 18-hole course and a restoration effort is underway.

9. Mason Park Wetlands Demonstration Site, 541 S 75th Street
The 104-acre Mason Park, which had its origins in 1928, includes a Spanish Mission-style community center, swimming pool, trails, hills, and playing fields. In 2006, a series of ponds and wetlands were created as a 3.5-acre buffer—for flood and pollution control—between surrounding streets and the bayou. Check out the new pedestrian and bicycle bridge that connects two sides of the park.

A 1941 painting of the Houston Ship Channel by Jerry Bywaters. Source US GSA.

Not far from Mason Park is El Bolillo Bakery, 2421 S Wayside Dr, where you can buy all manner of sweet baked goods. During Hurricane Harvey, seven trapped workers baked for two straight days and then donated the bread to shelters and first responders. If you want to stick to the Brays trail itself and making a roundtrip back to Hermann Park, Mason Park is a great final destination before turning around.

Bonus. Brady’s Landing, 8505 Cypress Street, and Houston Ship Channel
Take a detour off the bike route from Mason Park to refresh yourself at this historic restaurant with a view of the Houston Ship Channel. At the time of this writing, the restaurant is closed for renovation so check for its reopening before making the detour. You can see the Ship Channel from the end of the parking lot.