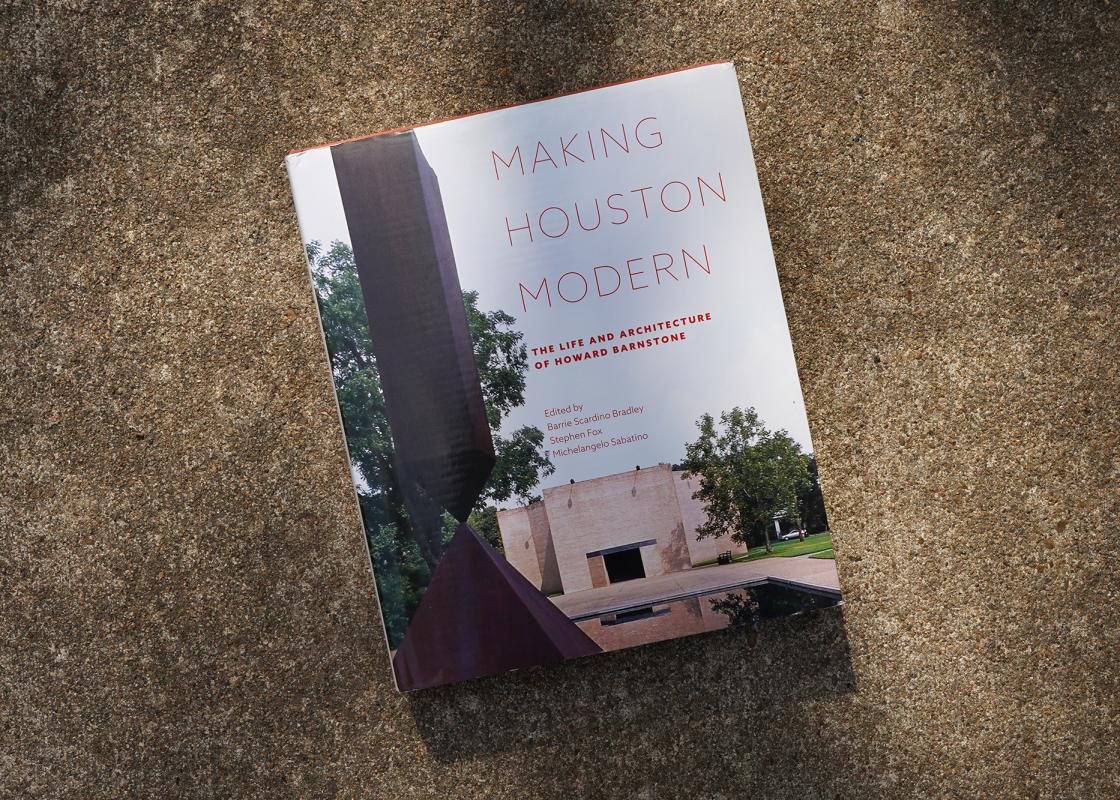 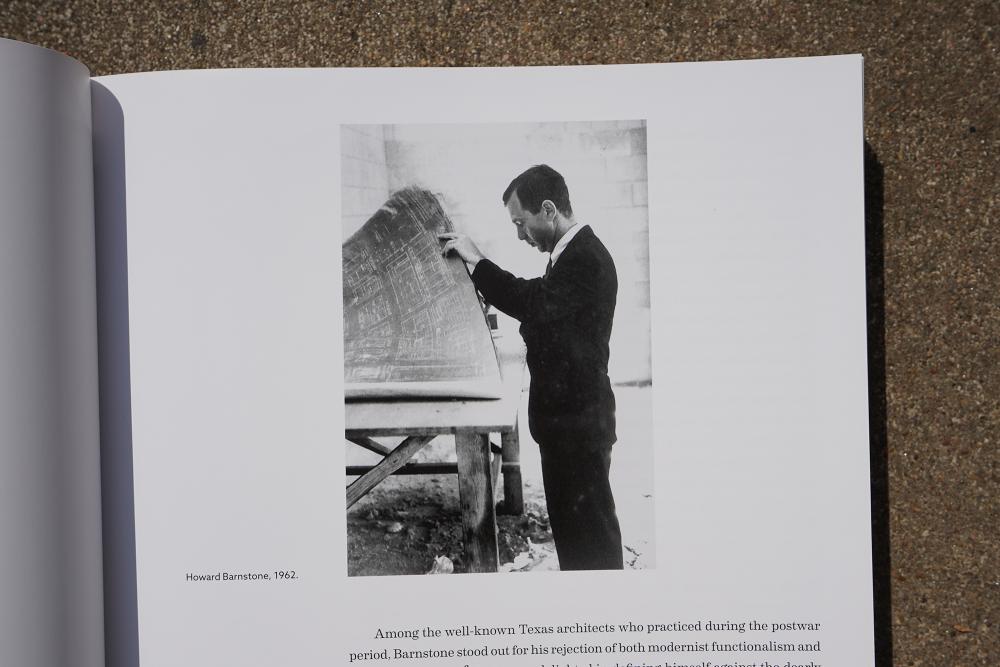 After serving in the US Navy from 1944-6, Howard Barnstone finished his Bachelor of Architecture degree at Yale in 1948. To celebrate his graduation, he set out on a cross-country road trip. Car problems in Oklahoma stranded him in Houston with family. A relative took him to meet Richard Lilliot, Jr., director of the newly started architecture program at the University of Houston. Lilliot offered him a job on the spot, and he accepted, thinking he’d stay in Houston for a couple years before returning home to Maine to become a “regional architect.” He never left. The rest, as they say, is history.

Barnstone looms large in the story of Houston architecture, as captured in Making Houston Modern: The Life and Architecture of Howard Barnstone, published by the University of Texas Press (2020). In-depth essays by a variety of authors are split between three sections—architecture, clients, and life—and edited by Barrie Scardino Bradley, Stephen Fox, and Michelangelo Sabatino, familiar names to those who follow Houston’s architectural history.

Though there are many captivating images, the book isn’t a coffee table book. Instead, it’s a detailed portrait of a man assembled by those who knew him. Why make a book like this? In the conclusion, the editors answer: “To those acquainted with Barnstone, an impersonal interpretation would appear woefully misguided.” His personality was as important as his buildings. In his foreword, Carlos Jiménez praises Barnstone’s “anecdotal wit and boundless charm,” but also his “subtle yet deep-seated sadness.” This volume devotes attention to all sides of a person in a way that few architectural monographs achieve. 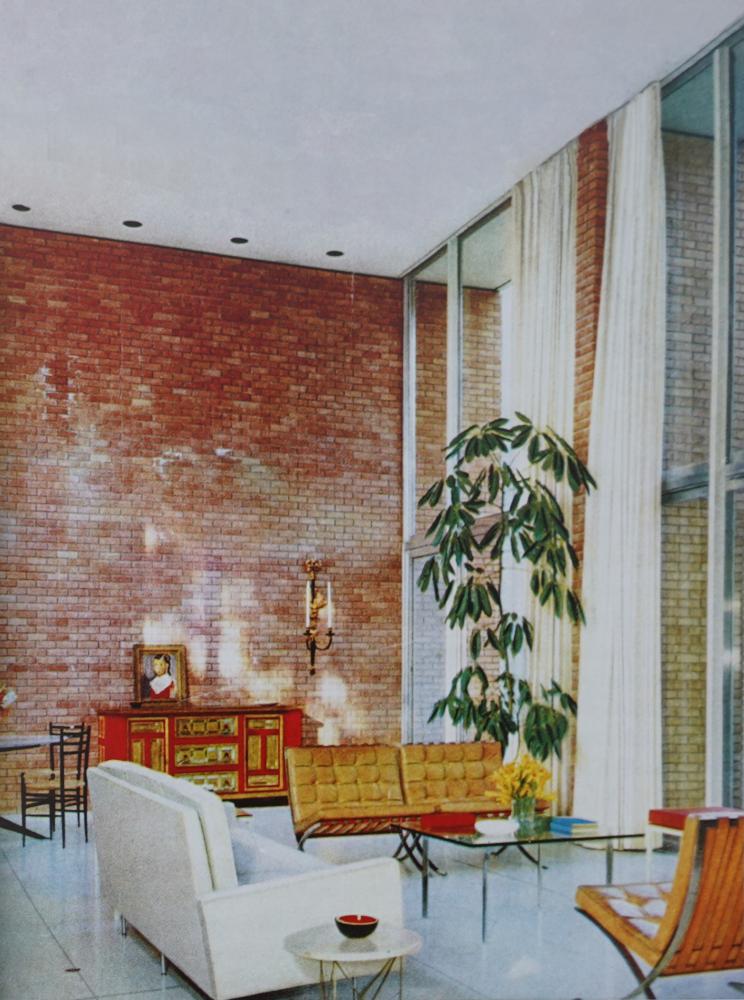 From the start, Barnstone was fascinated by social class. He practiced the “discreet charm” of the patrician style, as articulated by Fox and Sabatino in their introduction. Yet, they write, he refused to surrender totally, always maintaining an uneasy distance. Postwar architecture in Houston was mediocre, but improved significantly in the 1950s, thanks in part to the influence of Philip Johnson, Barnstone’s architectural hero. He not only adopted Johnson’s early Miesian leanings and cosmopolitan positioning, but also his sensibility that architects shouldn’t be afraid to take risks, a belief that would eventually propel him beyond hardcore Mies replications into other aesthetic realms. In recent years Johnson’s outsized impact is rightfully contentious given his active support of Nazi Germany, but this item didn’t seem to affect his postwar popularity, at least not for Barnstone, who was Jewish.

Barnstone also shared Johnson’s core architectural disability: He couldn’t draw and relied on the draftsmanship of others to commit ideas to paper. This established his relationship with assistants and partners: Barnstone appropriated “their skill, enthusiasm, and imagination to give varied form to his visions of space, light, and nature,” according to Fox.

As a result of his networking and ambition, Barnstone began working as an architect, finishing his first house in Beaumont in 1949. Residential commissions followed, sustaining him over the years, though he also took on commercial interiors, public buildings, and corporate campuses. The book includes drawings and images of many, including the muscular Maher House and the Vassar Place Apartments, which he undertook as a personal investment property and, for a time, officed there. His three main client groups, Bradley writes, were “the Menils, Houston’s Jewish community, and himself and his family.” Over time, his social influence expanded, as did his practice. Sabatino writes that when historians like Reyner Banham, Colin Rowe, and Henry-Russell Hitchcock later named the influential modernists in Houston, the shortlist, in successive generations, read Mies, Johnson, and Barnstone. 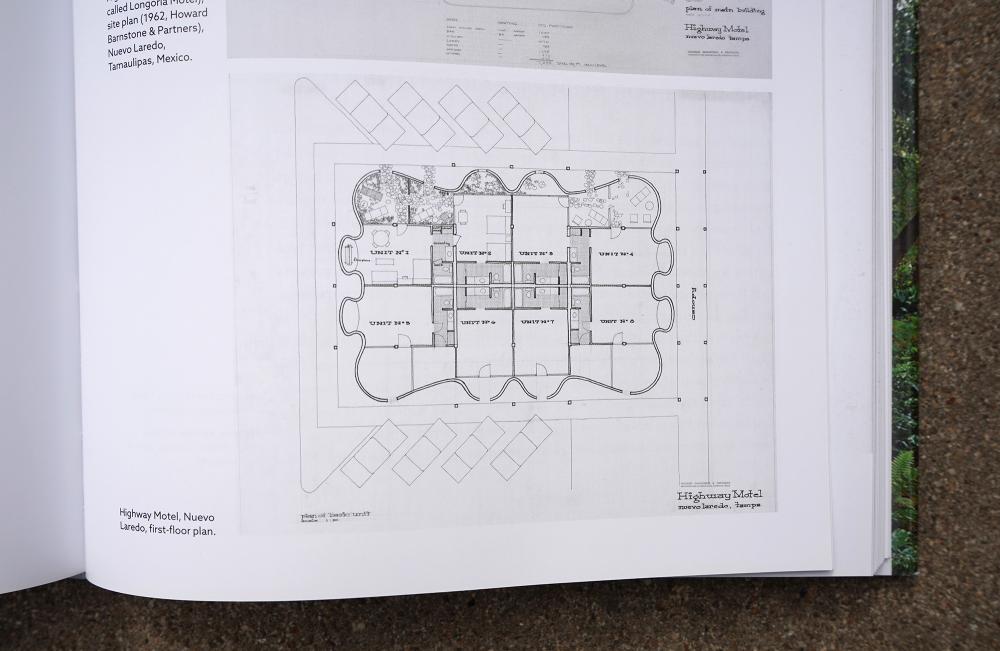 The first section of the book goes through individual projects in detail. Barnstone’s buildings “track the changes in US architecture,” Fox and Sabatino write. Beyond the Miesian homes for which he is best known, a pleasant crop of B-sides emerge: a wild (unrealized) hotel scheme in Mexico for his stepmother Marti Franco, a compound of renovated barns on Long Island, apartment complexes in Austin, among others. The volume also includes research interviews and a Catalogue Raisonné.

Throughout his career, Barnstone taught at the University of Houston, where he found many of his collaborators, including Eugene Aubry and Burnette Keeland. In the late 1970s, he employed Doug Michels, of Ant Farm fame, though Fox writes that “Barnstone’s method of editing Michels’s science-fiction-like designs was to have another draftsman selectively erase them.” An essay by longtime Cite contributor Bruce C. Webb regarding Barnstone’s relationship with the school includes the uproar following Johnson’s proposal for UH’s new architecture building, a work of “historical fiction” copied from Ledoux, which was eventually built. 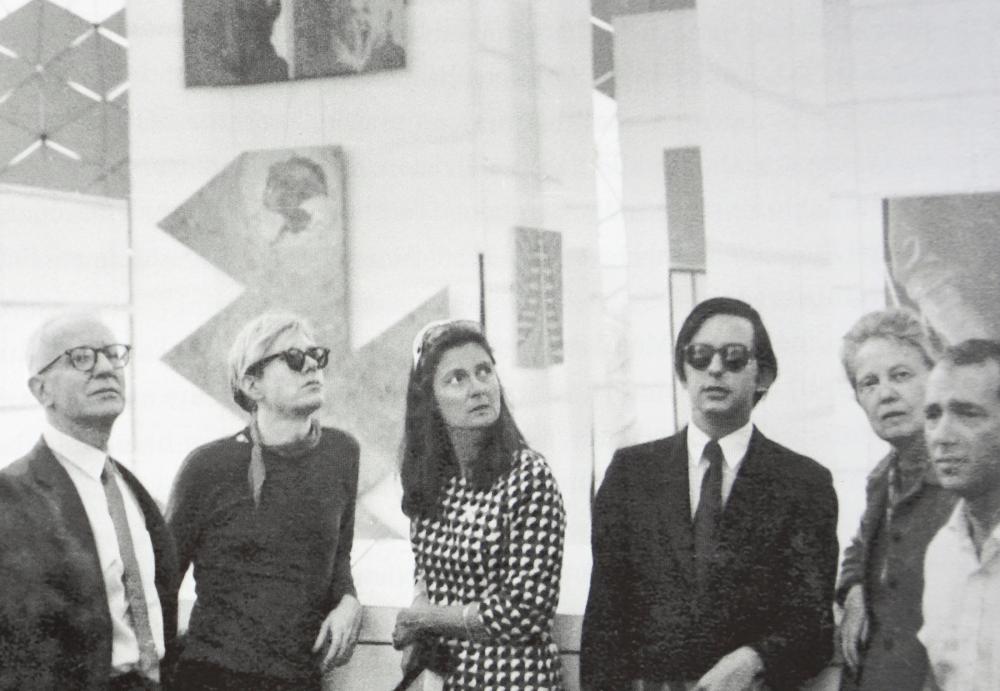 Bradley authors a chapter about Barnstone and the Menils, his most important clients. He met them socially in 1952 and soon started on small alterations to their home, which was designed by Johnson, culminating in a guest house and the courtyard canopy. John de Menil was an executive with Schlumberger, and the oil money flowed: Barnstone was soon designing office interiors in Houston and New York and company housing in South America, including a screened modern house in Trinidad. Barnstone became “indispensable” to the Menils, eventually working on designs for their children and other Schlumberger family members. He also wasn’t above menial tasks, at one point designing and installing the Menils’ Christmas decorations. He suggested painting their collection of bungalows gray with white trim, a choice that became “one of Barnstone’s most significant contributions to Houston.” The other, in Bradley’s view, was The Galveston That Was, supported by the Menils with photographs from Henri Cartier-Bresson and Ezra Stoller, which ignited local preservation efforts.

Making Houston Modern doesn’t shy away from Barnstone’s personal life. He suffered from bipolar disorder and, Fox and Sabatino write, was “inclined to behaviors associated with narcissism and hyperactivity.” He was captivating but also “self-centered, manipulative, envious, paranoid, spiteful, vindictive, caustic, and abusive.” His first bipolar episode ended his involvement in the Rothko Chapel design in 1968; it also coincided with his FAIA recognition and a painful divorce. Barnstone slowly rebuilt his architectural practice in the 1970s. His second episode took place in 1985 and preceded his suicide in 1987, via an overdose of sleeping pills. 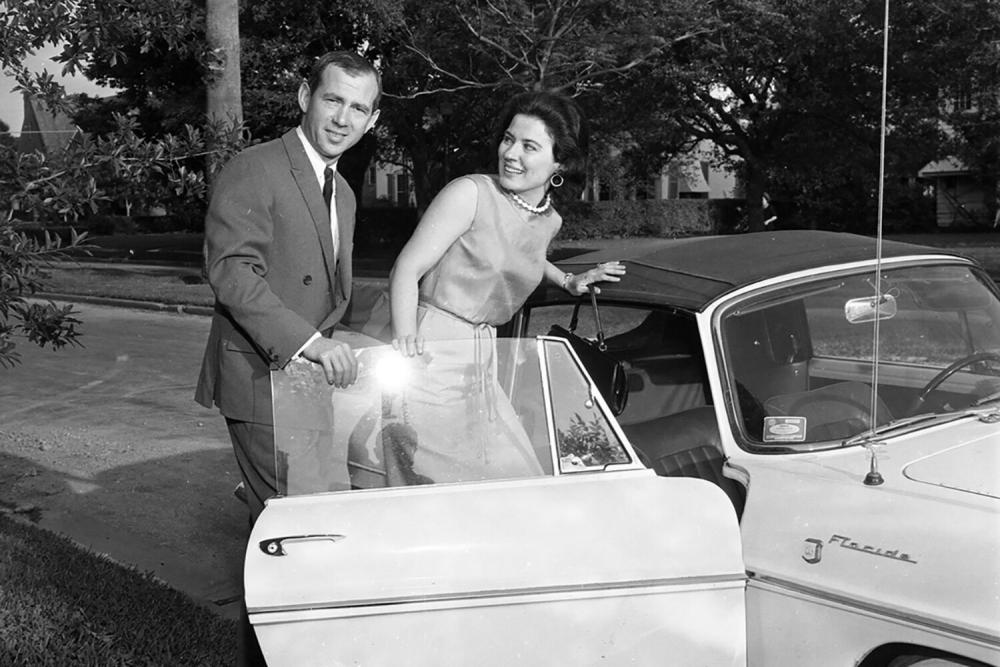 Barnstone’s emotional life also intersected with his romantic life. After a couple years in Houston, he fell for Gertrude Levy, an actress, artist, and activist. The two married in 1955. Olive Hershey writes that they were both “creative, handsome, liberal, and Jewish.” They had three children and circulated in a “glamorous” social circle. With the help of a Puerto Rican housekeeper, Hershey writes, Gertrude was free to pursue creative and activist work. She was elected to the Houston School Board and advocated for integration when many were still resistant, despite the Brown v. Board of Education ruling a decade earlier. The dual spotlight wore on a jealous Barnstone, and tensions increased. And, as Hershey explains, “their relationship deteriorated further as both began to seek sexual partners outside their marriage.” They divorced but later reconciled, even secretly remarrying in 1986 so she could access his benefits after his death.

Barnstone was also bisexual, a “romantic agony” that sadly went without recognition during his lifetime. Despite cohabitating with male companions between the early 1970s and 1987, Fox and Sabatino write, he denied that he was homosexual and acted according to normative heterosexual standards of masculinity. The editors acknowledge that “during most of his lifetime, it was not respectable, in the social circles to which he aspired to belong, to acknowledge same-sex attraction,” an admission that exposes the tight limits of Houston’s liberal elite. Racism also raised its ugly head, at times afflicting Jewish residents like Barnstone, as Hershey recounts in one anti-Semitic outburst that disrupted a party. 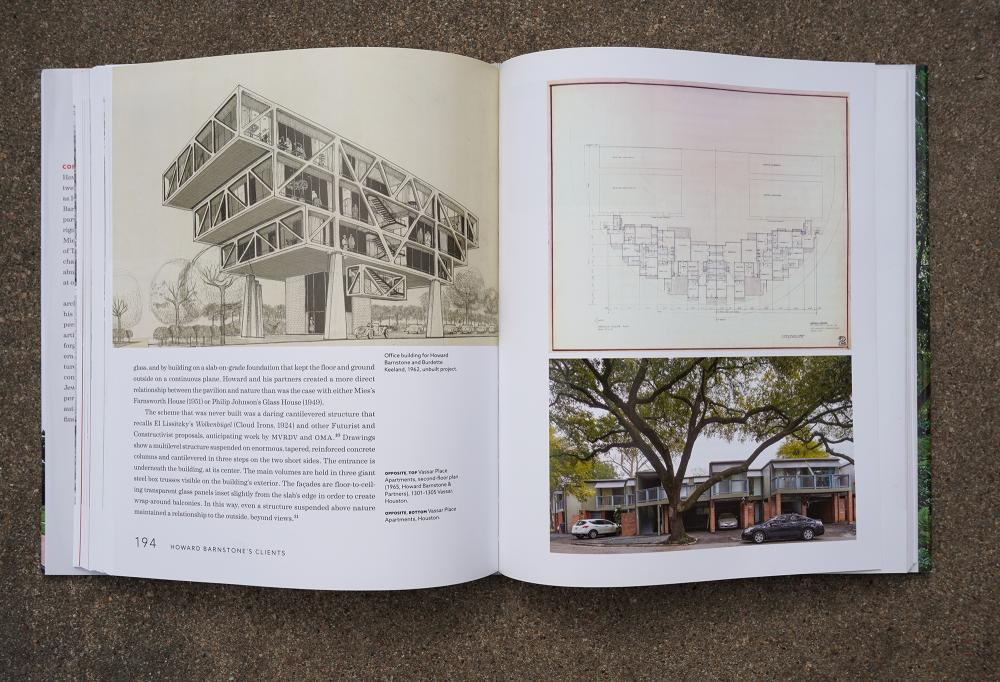 A spread from "Making Houston Modern" which includes a rendering of an office building (1962) and a plan and image of Vassar Place Apartments (1965).

In Houston, Barnstone’s otherness—his New England roots, Jewish heritage, bipolarity, bisexuality—placed him at odds with the prevailing culture, despite his best efforts. This tension fueled his intensity and formed a man who was “complex, complicated, and prolific." Making Houston Modern makes this clear in its thorough appreciation of Barnstone’s life.

RDA’s history emerges from the same social milieu that Barnstone cultivated in Houston, and the book mentions intersections of Barnstone’s history with that of RDA. During a 1977 housing symposium organized by our group, he turned on Danny Samuels for citing Isabella Courts as a model for low-rise high-density housing. To Barnstone, it was a “stucco slum.” He collaborated with Stephen Fox and others on The Architecture of John F. Staub: Houston and the South (1979). After his death, the RDA organized a tour of six of his houses. Making Houston Modern was enabled in part by an RDA grant funding the digitization of some of Barnstone’s drawings stored in the Houston Metropolitan Research Center. And, of course, Cite is a regular source for material about Houston's architecture and design. 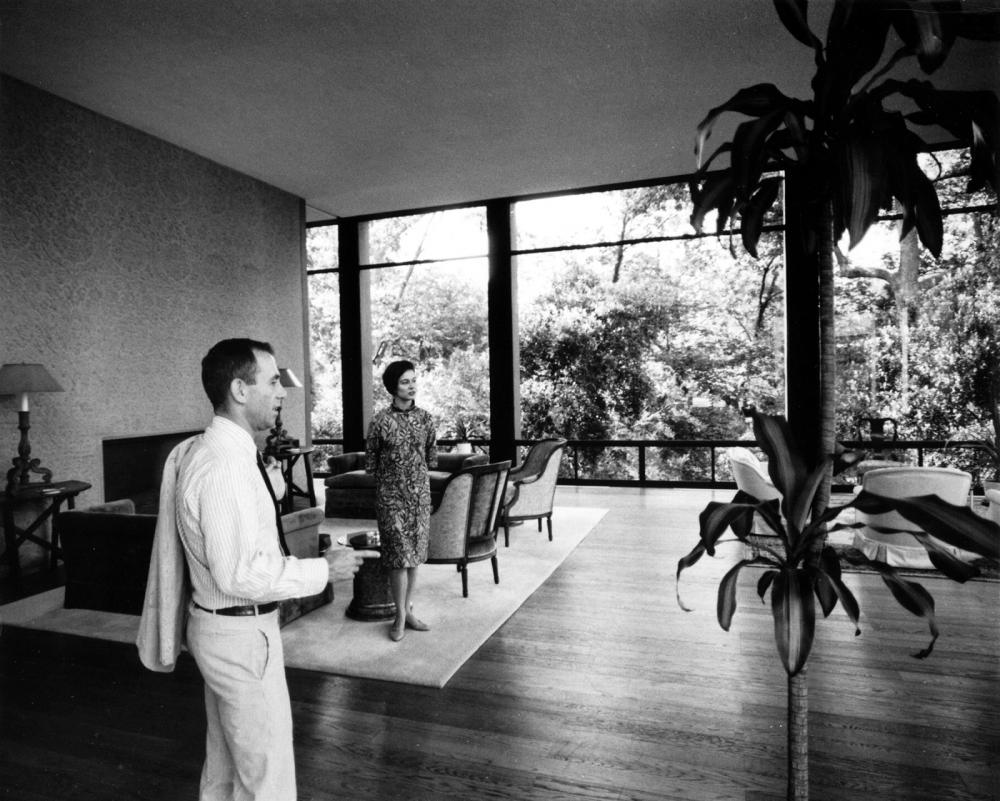 Howard and Gertrude Barnstone in the living room of the Maher House, June 25, 1965.

Reading the book, I had moments of recognition when I realized that I see Barnstone’s work regularly, and that his life largely took place where my mine now transpires, though with far less glamour. The family lived on North Boulevard, he completed the Vassar Place Apartments, and, later, he resided in a Staub house on Shadowlawn. Barnstone’s inner melancholy and outer accomplishment, mixed with the cultural charge of the era and Houston’s mod boomtown aesthetics, would easily sustain a biopic sliced into a season of episodes—it would be good TV, in case anyone from HBO is reading this.

Today, Barnstone’s architecture, depleted through demolitions, alterations, or neglect, seems compromised at best. Making Houston Modern makes the case that his legacy also resides in the culture he proliferated, both social and architectural. It also illustrates how societal strictures—those of ethnicity, gender, sexual orientation, mental health, and class—oppress us all in some form. In the right moments, a little kindness goes a long way. Barnstone’s “serene” spaces stand in counterpoint to his provocative personality, and this unstable equilibrium, between “spatial calm and emotional intensity,” was where he sought refuge. His quest for “magic”—floating designs that “viscerally affected the perceptions of those who inhabited them,” as the editors write—mirrored his desire to rise to the top. And he did.