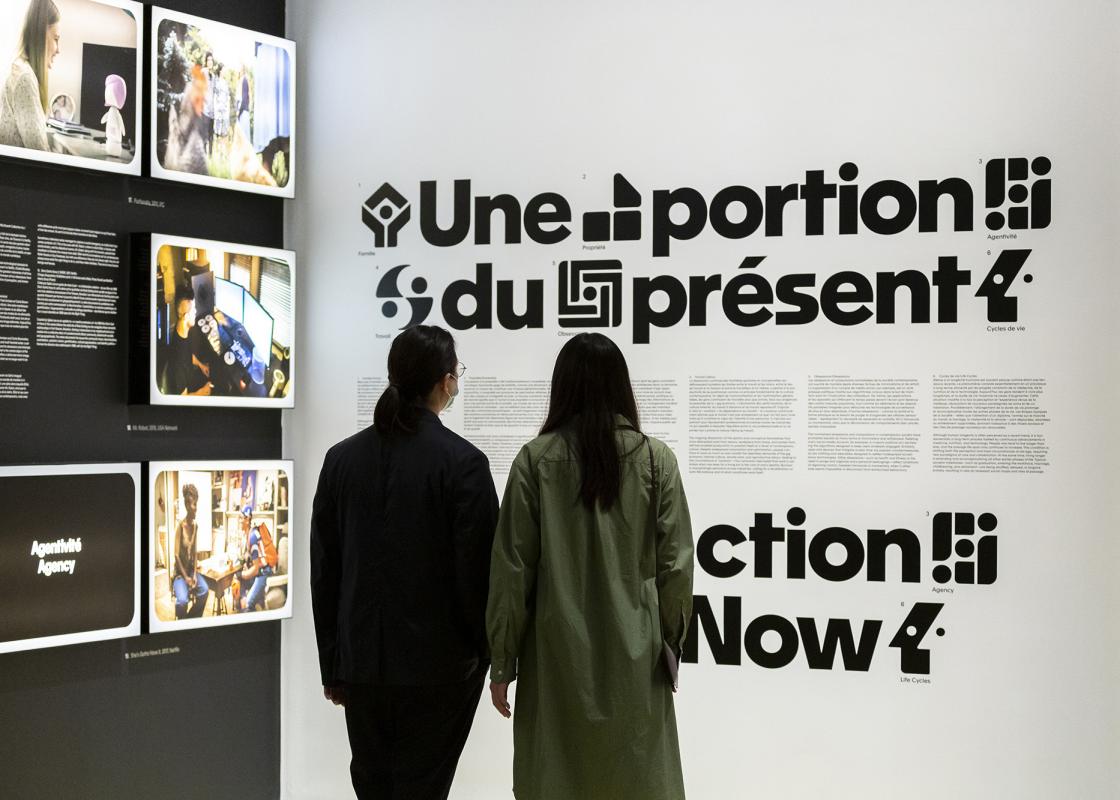 A Section of Now, a new exhibition at the Canadian Centre for Architecture (CCA), explores how architecture responds to contemporary life. The show attempts the herculean task of looking at our norms and rituals and asking what architecture can do in the midst of ongoing transformations. It rewards viewers not with answers, but ideas—examples of tactics and lifestyles, aligned under the shared goal of survival. 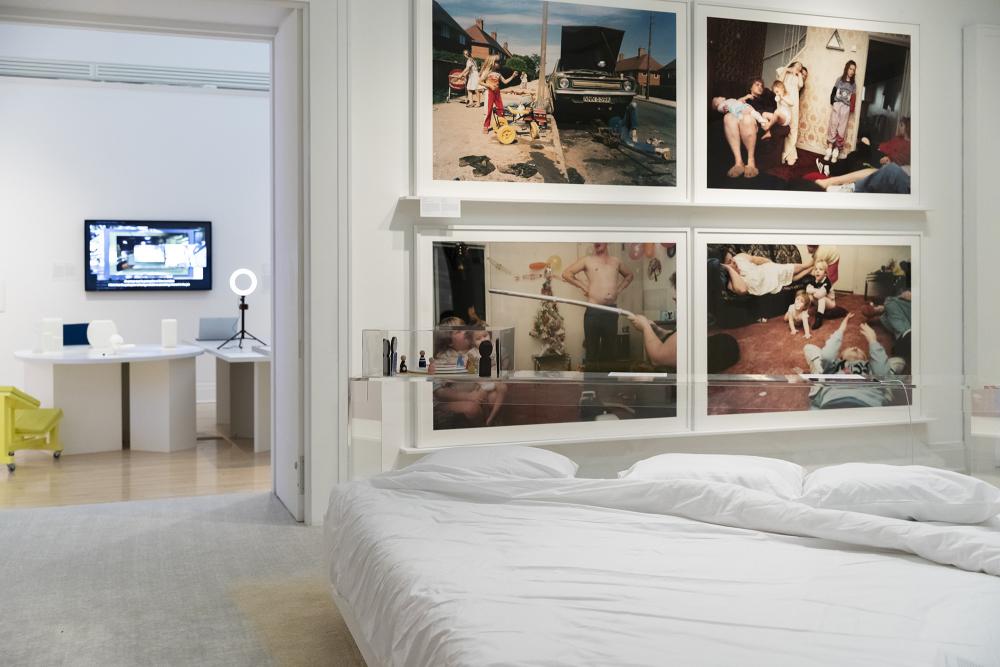 Where do the exhibition’s messages begin to take hold? Is it online, through the CCA’s wider platform of Catching Up With Life, which hosts videos and essays on the same topic? Maybe as you approach the CCA’s building in Montreal and are greeted by Douglas Coupland’s acerbic, apocalyptic placards? (“NUCLEAR WINTER WILL FIX GLOBAL WARMING,” etc.) Perhaps when you see the show itself, which stocks the museum’s galleries with objects, images, and texts from a wide range of contributors? Or, finally, when you return home with a new awareness of how things could be different? The answer is E) all of the above.

The show’s distribution across spacetime evidences its twin impossibilities. The section, as an architectural drawing, slices vertically to reveal arrangements; part of that situation is inevitably “behind” the drawing and therefore omitted. How to decide what we see? And, always, the question of the contemporary—when is now? Society has always had mirrors; architecture is one of them. These devices allow people to understand “their place in their time and their time’s place in history,” as curator Giovanna Borasi says in an introductory video. (Since January 2020, Borasi is also CCA’s Director; her conversation with RDA’s Executive Director Maria Nicanor appeared in Cite 102.) Referencing societal changes since the 1980s, Borasi states that society and architecture have become out of step. This opens a space for intervention. 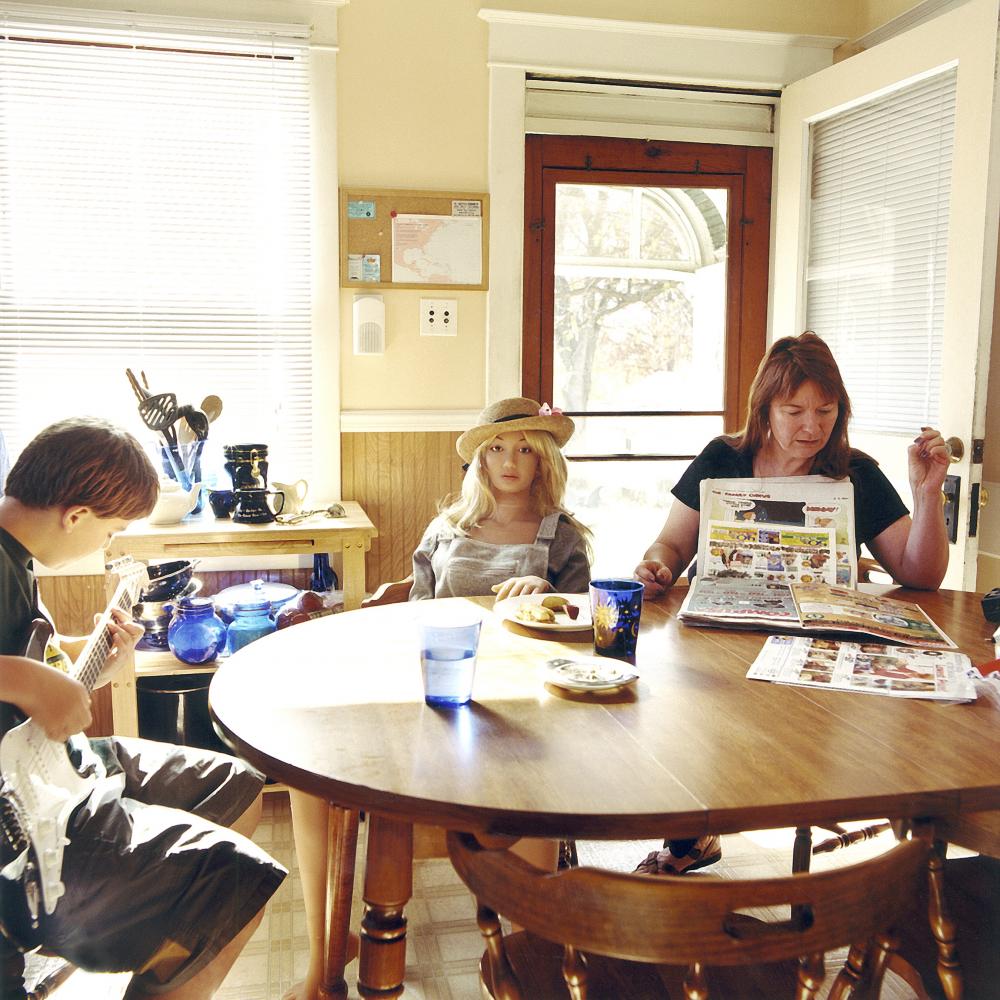 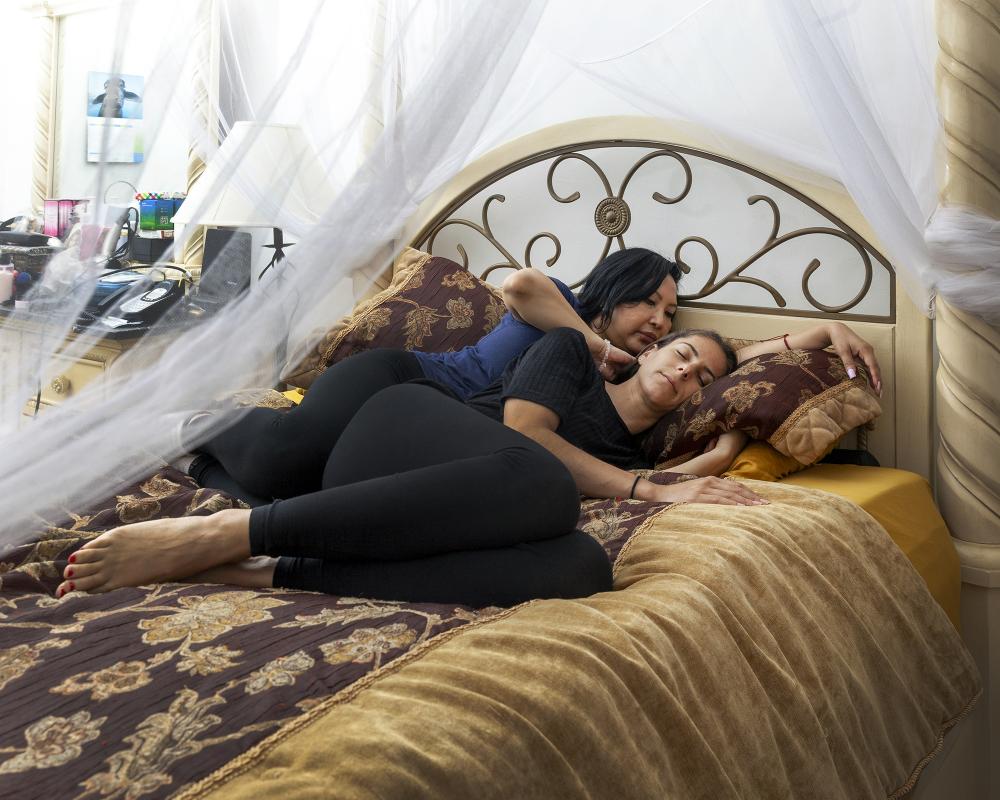 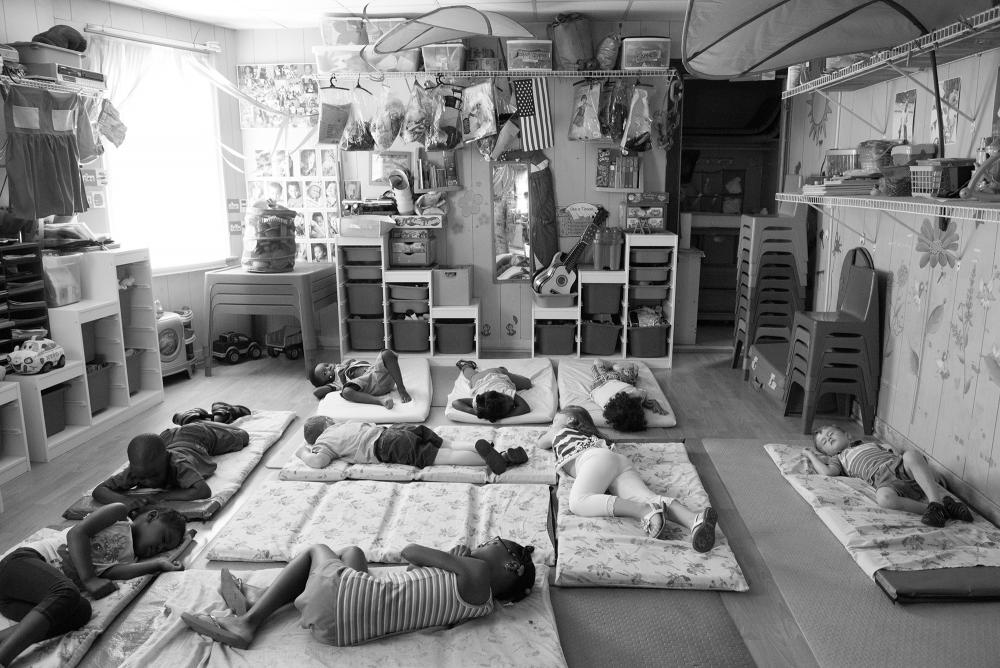 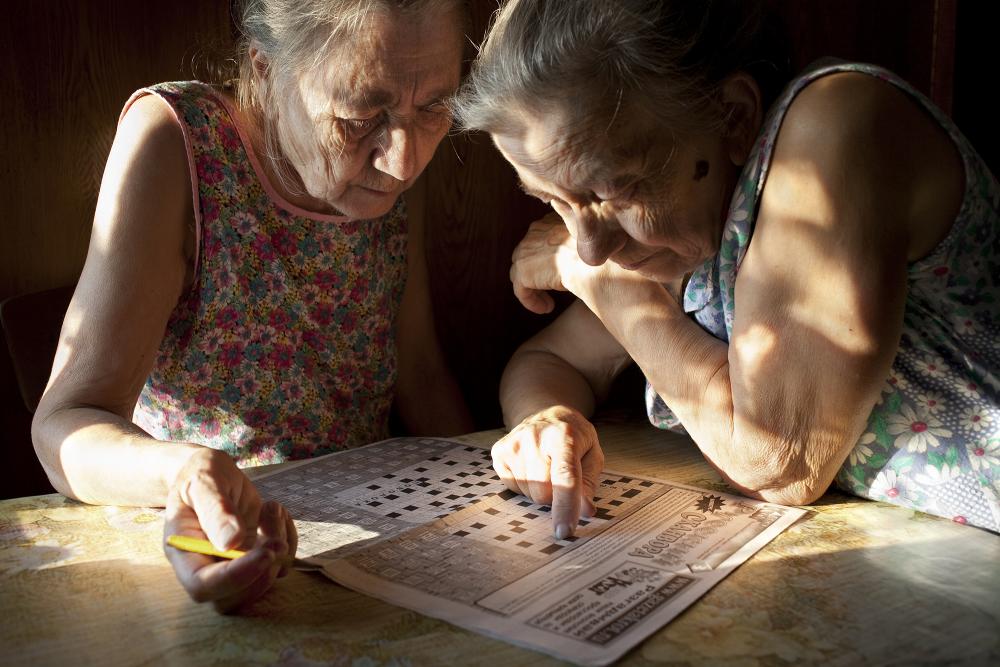 A Section of Now studies six themes—family, ownership, agency, labor, obsession, and life cycle. The show’s objects are staged in the CCA’s main galleries in Montreal. To start, an introductory text is paired with screenshots of recent television shows installed as lightboxes. In the first room, Family examines changing arrangements of who we hold close, seen most prominently in the triangular bed by June14 Meyer-Grohbrügge & Chermayeff, designed for “the nuclear family and its opposite together.” Housing examples are shown, including Constellation House, a tower by Something Fantastic, materialized as a brilliant aluminum model. Photographs line the walls, including images by artist Jamie Diamond from projects that explore the space of cuddling (Cuddle Party) and acts of paid intimacy (Skin Hunger).

New models of possession are explored under the heading of ownership. Projects by DOGMA and New Academy, Jack Self, and Assemble Studio offer views of alternate housing futures, while terra0 speculates on “automated ecosystem resilience frameworks” in which forests can mint its own cryptocurrency. There are more down-to-earth entries, including the sanitary block of an apartment building by Degelo Architekten in Basel and selections from The Debt Project by photographer Brittany M. Powell.

In this room, a large map by Los Angeles-based Folder Studio marks where it’s legal to sleep in your car in the city; in addition to numerous charts included in the exhibition, the studio provided its overall graphic design. Their six “icons disguised as logos”—in their own words—hover between 1960s supergraphics and 1970s corporate/public media branding, offering a familiar-but-enigmatic anonymity when seen together or occupying the thick thresholds between rooms. The treatment is a good fit for the temporal ambiguity of the show’s provocations. 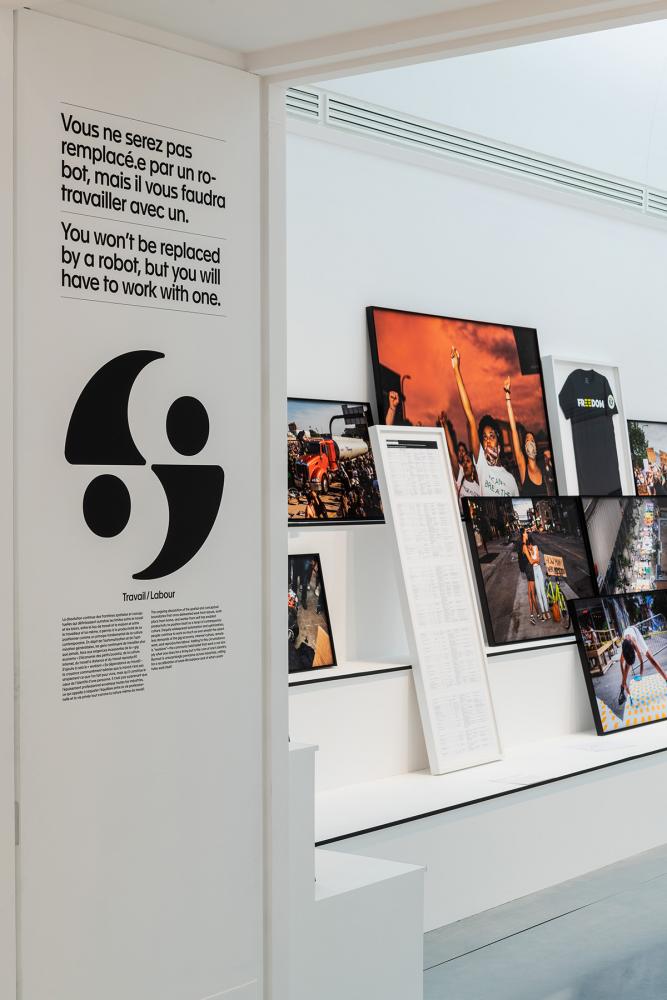 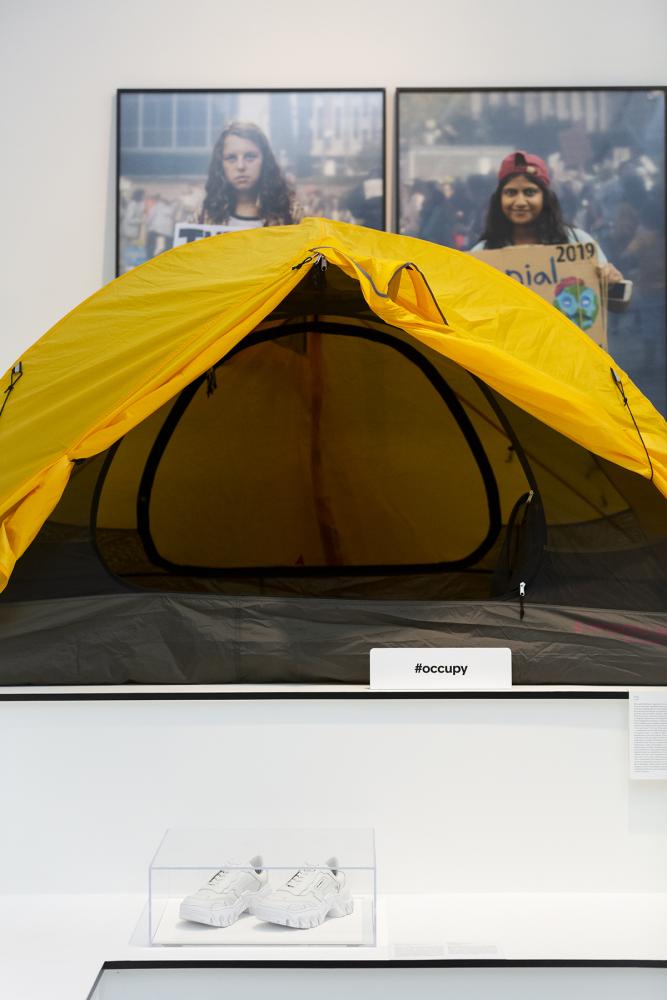 "A Section of Now: Social Norms and Rituals as Sites for Architectural Intervention." Installation view, 2021. 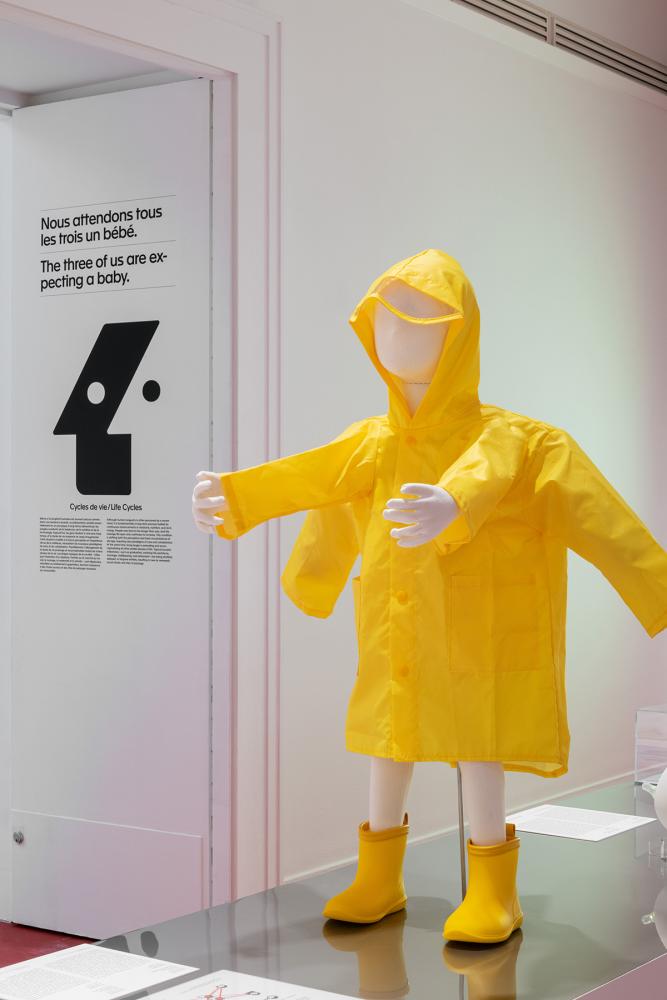 Agency stages documentation of recent actions and protester portraits on bleacher-like plinths. Images by Lucas Foglia and others are collected in layered frames; the staging gives viewers a timeline to inhabit and empathize with. Among other objects is a stylized version of BIPOC Studios, a Google spreadsheet collecting Black, Indigenous, and POC-owned design studios which began in the weeks after the murder of George Floyd. (Virgil Abloh was one of the document’s originators). These entries center youth and its impermanence: a yellow tent reminds us it has been a decade since the Occupy movement—what, if anything, has changed? A renewed awareness of racial justice makes a brief appearance here, in response.

Our work/life balance has been transformed. As evidence, photos of a 24-hour daycare by Alice Proujansky and Michelle Groskopf’s photos of a Hype House for teenage content creators in L.A. are staged near a speculative proposal for an amenity utility from Jesse LeCavalier and framed Facebook ads to lure remote workers to rural areas. (The big photographs everywhere are essential emotional components of A Section of Now.) A moment of Houston connection shines with the inclusion of Office Party by HOME-OFFICE’s Daniel Jacobs and Brittany Utting, who teach at the University of Houston and Rice, respectively. This room has five tables, each a different shape; one is a ping pong table, another sports a ring light. There are Gen Z vibes, with a hazy Deep Work playlist in the air and an electric scooter secured to the wall. Other than research on food delivery during lockdown, there are few mentions of COVID-19; this makes sense, as the show was conceived in and planned for the before times. LIke everything else, it was delayed. The pandemic will be an important topic for an exhibition, just not when we're still living in it.

Throughout, the exhibition design by Sam Chermayeff of Sam Chermayeff Office with Betsy Clifton of Associates And is strong. Galleries are pleasantly overcrowded with images and vitrines; each one “tells a little story,” Chermayeff said during one of the opening day talks. Displays are variously and appropriately fashioned out of transparent acrylic, oversize tall blocks, or chunky vitrines—architecture masquerading as furniture and vice versa. Floor materials demarcate space but leak across walls, notably with an arc of yellow carpet spilling out to welcome viewers.

A metallic “tribunal,” illuminated like the bulbed surround of a movie star’s vanity, cuts diagonally across the next room. Objects of obsession—a tote bag, a glass straw, supplements, crystals, a hooded sweatshirt, loud sneakers, a yoga mat, reusable bags, laptop, kettlebells, plants in idiosyncratic pots, a selfie stick, an avocado, a bread bowl, oat milk…—are staged against a draped background, mimicking the infinity curve of a photo shoot. In front of portraits of people watching television, items to steer us away from the smart phone are offered. 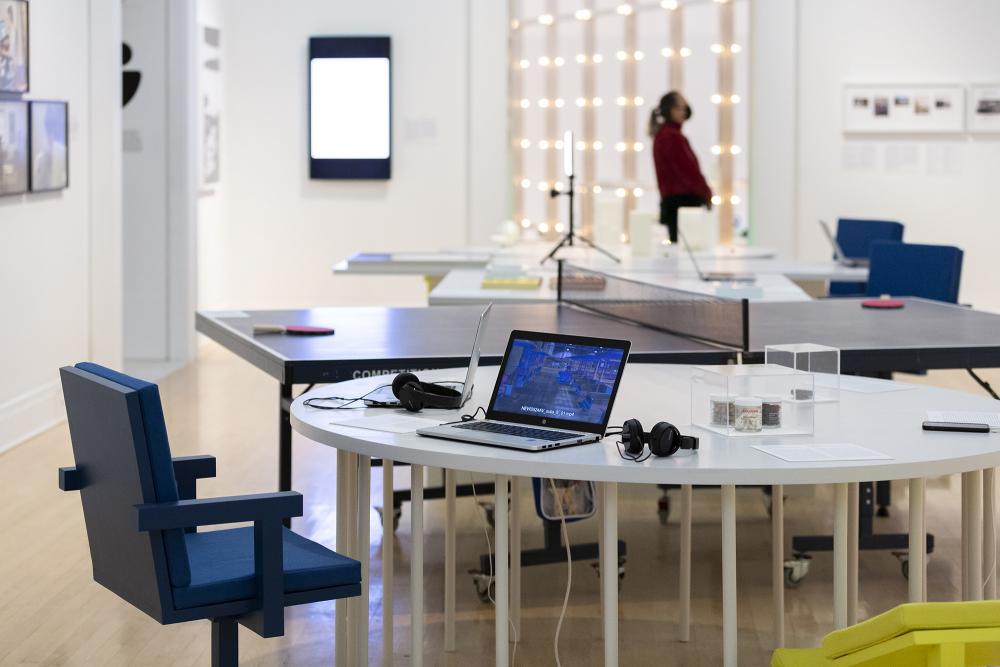 The remaining topic is life and death. New objects—a prototype for a home insemination kit, an artificial bosom for non-female nursing, a raincoat for a child with three parents—are foregrounded by images of Swedish home birth and Russian old age. Architecture reappears; there’s an amazing illuminated drawing by Common Accounts and documentation of a crematorium by OFFICE Kersten Geers David Van Severen, currently under construction in Belgium. This is the heaviest gallery, filled with the video sound of Dan Chen’s end-of-life robot stroking the arm of a dying person while intoning the mortally empty language of customer satisfaction.

Many of the exhibition’s entries are responses to contemporary life under consumer capitalism in developed countries. Products are invented, obsessed over, and problematized. Solutions are realized one project at a time, even if collectively. While it’s true that individualism defines our era, there isn’t an equal accounting in the show for the powerful forces that have lobbied for this to be our reality. The changes reshaping our lives are the results of decisions by others. The gig economy proliferates because of its contractual casualness, but also because of its return on investment for venture capitalists. The reimagination of housing takes place due to desire, but also because housing supply has been chronically underbuilt. We’re freer than ever, but wealth piles up at the top. And so on. It’s timely that the show opened on the final day of Cop26, which writer George Monbiot likened to a “suicide pact,” as its results showcase our ongoing inability to cooperate even when faced with the existential threat of climate change. 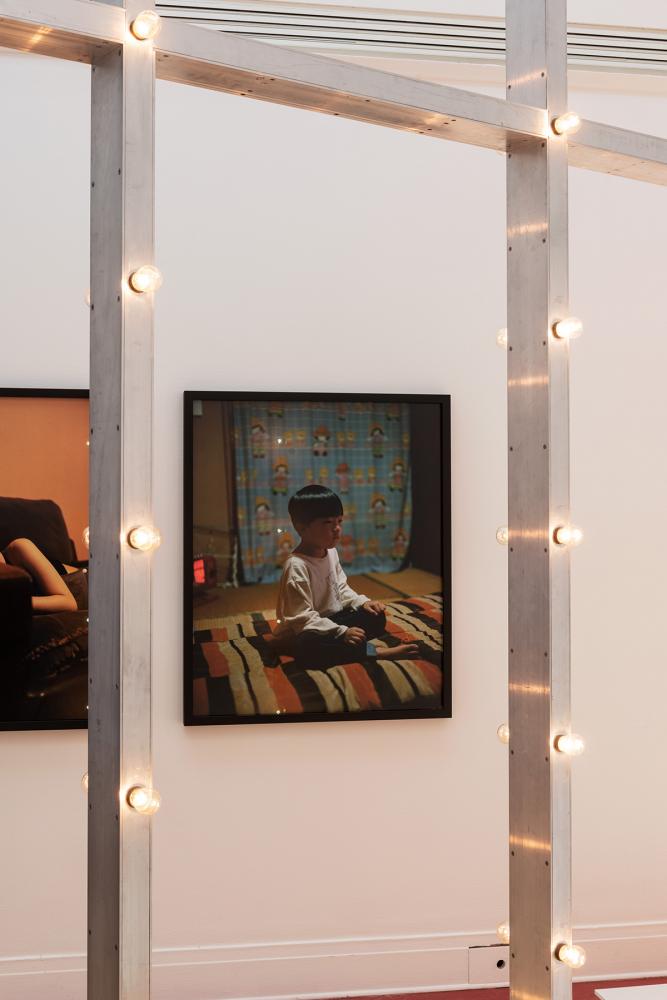 A Section of Now builds on the themes of prior CCA exhibitions, notably Our Happy Life (2019) and Imperfect Health (2011). In the chained process between design, construction, and inhabitation, the show skips the middle portion, focusing instead on the outer items. This omission is intentional; Borasi is interested in “architecture speaking for itself.” Architecture’s “more intrinsic qualities are what make [it] endure, and what make it meaningful—if the architect has an interest in these issues, and if we (the users) are able to look beyond the materiality of built form, functionality, and specificity of context,” she writes in the introduction to Besides, History: Go Hasegawa, Kersten Geers, David Van Severen. If architects can show their thinking through architecture’s intrinsic tools, then the work “fulfills a greater purpose than simply performing as built form” and can give us “insight into our society and culture.” This ambition animates the best parts of A Section of Now.

Through Catching Up with Life, CCA’s research on these topics continues until next April. On December 3, they will host Designing for a Future of Care, an event about Carehaus, an intergenerational co-housing project featured in the exhibition that will open in Baltimore in 2023.

Looking ahead, a book related to the exhibition is due out soon; it was designed by Folder Studio and will be co-published with Spector Books. In addition to expanding the show's research, texts are filed by Andrés Jaque, Karla Rothstein, Mario Gooden, Sam Jacob, SO-IL, Sumaya Vally, Tei Carpenter (who was recently interviewed in Cite), Traumnovelle, Anna Puigjaner, and Hilary Sample, among others.

What’s most impressive about this moving exhibition is that its findings are shared without judgement. There’s no official line on whether these innovations are right or wrong, only that they’re here with us. “This is reality; is it good?” Chermayeff wondered during an opening conversation. The CCA’s resources are deployed to furnish a clear-eyed snapshot of how architecture reacts (or doesn’t) to being alive today.

A Section of Now avoids the insult of didacticism; instead, visitors who see the show before it closes next May will be faced with the task of figuring out what it means for themselves. If this act of introspection forces a new lucidity, then the discomfort means the show is working. As Borasi says in the video, “that is, after all, what life in our society is increasingly like.”