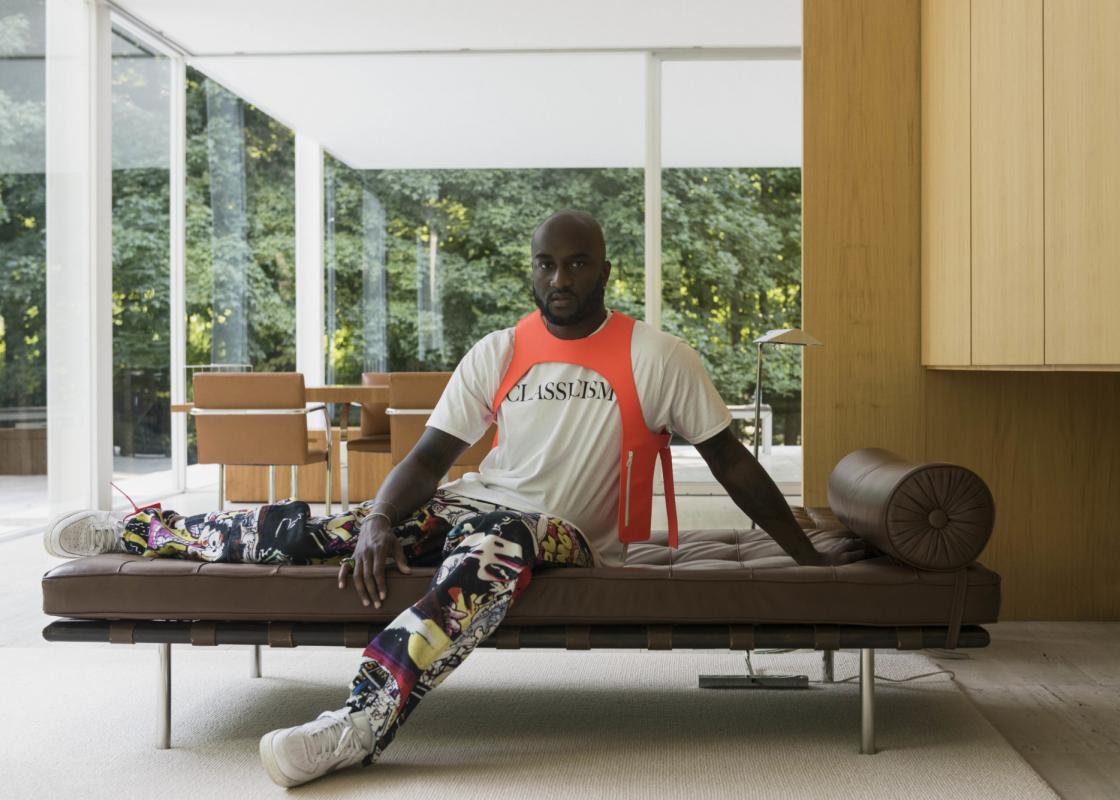 Virgil Abloh in the Farnsworth House. Photograph by Richard Anderson. Via Kaleidoscope.

Thumbing through Virgil Abloh’s recent posts on Instagram, one would soon notice a round white plate titled “Life Itself.” Imprinted with several cracks and a line of black text, it was one of the many artworks designed by Abloh to support unhoused people in New York City.

Life itself is larger than a plate. For this immensely talented person, it is a chance to challenge cultural and societal norms through sheer creativity. Or it was. Virgil Abloh died on Sunday at the age of 41. He realized a far-reaching, powerful design practice that has profoundly influenced the current paradigm of fashion, art, and architecture. He was motivated by, as his wife Shannon stated in announcing this news, “the power of art to inspire future generations.”

Three years ago, Abloh was appointed as an artistic director for menswear at Louis Vuitton, becoming the first Black American to lead this European luxury house. Soon after his new appointment, Abloh released his inaugural collection in Paris, breaking ground by inviting models of color from all over the world to walk on a 200-meter-long rainbow runway, in homage to the LGBT rainbow flag. Abloh, standing in front of the Jardin du Palais-Royal, showed up as an advocate for diversity, equality, and inclusivity within design. He had come a long way, and so fast, since founding his brand Off-White in 2012.

Throughout his fifteen-year design career, Abloh situated his works in the context of pop culture and consumerism through redefining and editing cultural and historical references. Throwing his hat into the ring of hypebeast culture, Abloh established his mark with an “industrial belt” in a shocking yellow covered with the brand's “Off” logo, rendering it the must-have piece of 2016. Artists like A$AP Rocky, Jay-Z, and Abloh's close friend Kanye West styled his belt in an ambiguous fashion, trendsetting the start of its logomania. 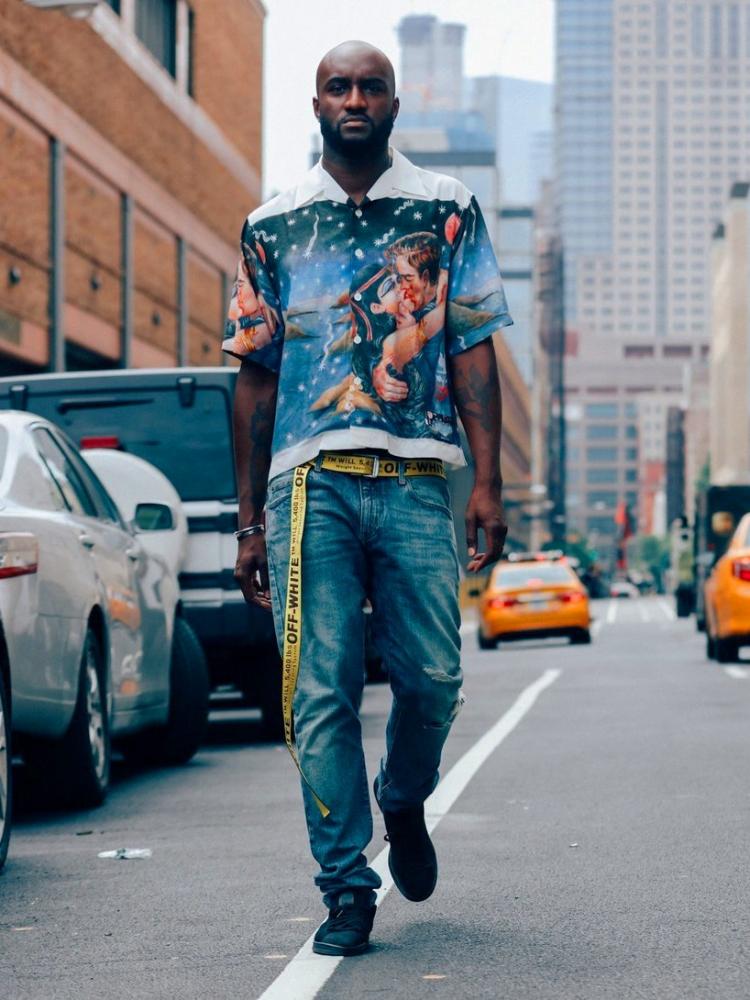 Off-White was influential among young fashion influencers and the wider fashion industry itself. Merging his love for street fashion, couture, and architecture, Abloh started his atelier in Milan and focused on making clothing with high-quality materials by taking inspiration from existing fashion norms. References to 1960s and 1970s motifs later became prominent in Abloh’s work. He often credited Dapper Dan as a “creative genius” who brought a different interpretation to gangster fashion. For Abloh, the idea of fashion was articulated through his citing and editing of elements already existing in culture. He used “irony, reference, and the self-aware wink”, as Vanessa Friedman claimed in the New York Times, “to re-contextualize the familiar and give it an aura of cultural currency.”

By reconstructing the imaginaries of everyday life, Abloh questioned the meaning of fashion itself and expanded its influence into other realms of consumer goods. For example, he worked with IKEA to design rugs and with Vitra to reproduce its famous Anthony chair with the addition of his signature details. In collaboration with Braun, Abloh recorded a short film inside Mies van der Rohe’s Farnsworth House about Dieter Rams’s Wandanlage stereo system, which he updated. In presenting the video, Abloh said he worked with “the consistent mission of etching Black historical context and other diverse narratives into existing canons of all types.” To support the Black community, he initiated the “Post-Modern” Scholarship Fund, raising over a million dollars to support Black students in the fashion industry. Later he released the “I Support Young Black Business” T-shirt, which was launched to raise money for charities that provide support to reduce gun violence and increase youth employment opportunities.

Like some of his contemporaries. Abloh came to fashion through architecture. After growing up outside of Chicago as the child of Ghanaian immigrants, he completed degrees in engineering and architecture at the University of Wisconsin at Madison and the Illinois Institute of Technology, respectively, before starting his career to “make a brand to do architecture.” It’s easy to see the conceptual entanglements between these two industries–both share a concern for the body and shelter–but it isn’t easy to make cross-disciplinary collaboration monetarily successful and materially powerful. Abloh worked ceaselessly at this intersection by cleverly synthesizing the zeitgeist into his works; architectural thought informed the making of fashion scenes and garments. He constantly cited and incorporated Mies van der Rohe’s works in his practice. In the set design for the Louis Vuitton Fall-Winter menswear collection, for example, among the green marble walls and Barcelona chairs, models were dressed in puffer jackets adorned with models of historic landmarks in Paris and well-known skyscrapers from around the world. In the Fall-Winter menswear collection in 2021, he unveiled the fashion show in a nine-story, scaffolding structure constructed at the Bucheon Art Bunker B39 in Seoul, Korea, with those same Barcelona chairs serving as the symbol of his tribute to the great master of modernism. 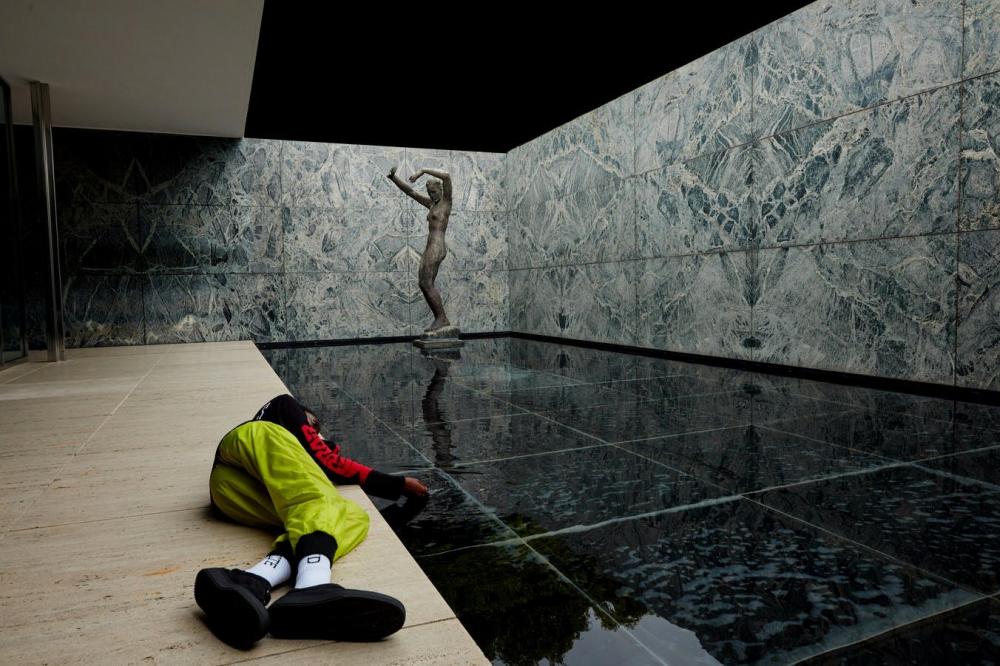 A fashion shoot styled by Virgil Abloh in the Barcelona Pavilion, by Mies van der Rohe. Photo by Fabien Montique. Via Archinect.

In collaboration with AMO, the research arm of OMA, he led the design of the Off-White flagship store in Miami, Off-White Paris, and the 2019 exhibition “Figures of Speech” at the Museum of Contemporary Art Chicago. Similar to OMA/AMO’s prior work for Prada, experiments with aesthetics united with an urban material palette: corrugated metals, white concrete, and colorful meshes. Abloh’s visions challenged the traditional showrooms of fashion’s luxury regime. In his stores, a high level of flexibility was explored to accommodate a broad range of functions, producing new forms of engagement between the brand and the space, luxury product and visitor, and—most importantly—the known and the anonymous.

When Abloh was realizing his furniture collection MARKERAD for IKEA in 2019, he spoke about his deep interest in anonymity. “The ethos of the collection is to add an artful quality to anonymous objects,” he stated. One of his most idiosyncratic design touches which elevates anonymity is to ironically cite self-referential text within quotation marks. These quotation marks simultaneously pull things into attention while questioning them. Abloh’s copy-paste logic and ironic detachment will be adapted by those who follow; others will surely quote him as an artist, musician, DJ, magician, architect, engineer, and fashion designer—with or without quotation marks. In a short and intense life, he is already influential enough for his work to be honored at the highest level—to become an anonymous, accepted aspect of our culture.

Just as he never wanted to be defined, he never will be.

Max Bravo is a fashion designer based in Houston. He is currently working on his fashion brand Max Bravo. Leveraging a degree in Interdisciplinary Art studies, he has shifted his devotion to the arts into fashion.

Leyuan Li is a designer and educator based in Houston. He currently teaches at Rice Architecture and is the founder of the interior design practice No-no Atelier.